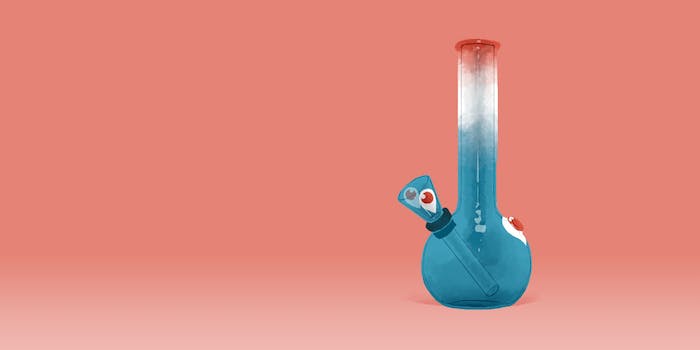 'Weed has been illegal for so long that being a stoner is some kind of a cult of illegality.'

If you scroll through the dazzling display of humanity on Periscope long enough, you’ll eventually come across someone smoking weed; it’s become a performative, community-building act on the livestream app. So two Portland, Oregon, comedians decided to turn their love of blowing trees into a very blunted call-in show.

Every Thursday at 8:20pm PT, Robbie Pankow and Jen Tam host Bongcast Live, in which they solicit call-ins (and nudes), jabber about pop culture, and get blazed. To hear them tell it, they were destined to meet: One night at an open mic gig, Pankow did a joke he’d been practicing about fashion and Tumblr.

“It never got any laughs at all,” Pankow said. “Except one night I heard one person cackling in the back.”

“I found myself laughing at Robbie’s jokes about Tumblr when nobody else in the audience knew what Tumblr even was,” Tam said. “I told Robbie in real life that I liked his Internet-based humor and the rest was history.”

For two years, Tam and Pankow bounced around ideas about what they could do together to capitalize on their shared sense of humor.

“But we pretty much just ended up in Jen’s living room smoking weed and making each other laugh,” Pankow said. “Once Periscope became a thing, it seemed like a really natural thing to just make that the show.”

Bongcast Live was born out of nostalgia for a medium, but its birth also marked a very special day in history.

“We both had live call-in shows that we enjoyed when we were kids,” Tam said. “Loveline, Howard Stern, The Best Show on WFMU, radio stations that would let kids call in shout-outs for their high schools. Also, Oregon was legalizing marijuana use on July 1. We launched the first official show on July 2 when it was legal to puff at home while broadcasted all over the world.”

Tam added that she’s interested in the “voyeuristic” relationship users of the app experience, and the glorious array of “weirdos” you can connect with at any given moment across the globe, much like the Internet’s gilded dong carousel, Chatroulette. There’s also the ease of producing a show on the app, which highlights how much potential there is for comedy broadcasting. UCB was using Periscope to give improv advice, and comedians like Nick Kroll and Jimmy Fallon were some of the app’s early adopters. Comedy clubs are jumping in too.

Along with podcasts, Periscope offers yet another platform where comedians can try out material—and on Periscope, they can get an instant flurry of feedback.

“There’s no editing or uploading or anything, you just press a button and start having a show,” Pankow said. “The downside is that it’s only viewable for 24 hours after the stream ends, but for now that just makes the whole thing more rare and valuable. It’s a limited collectors’ edition podcast. No DVR.”

Indeed, Bongcast Live is best experienced in the moment, in a cloud of smoke, with all the other weirdos.