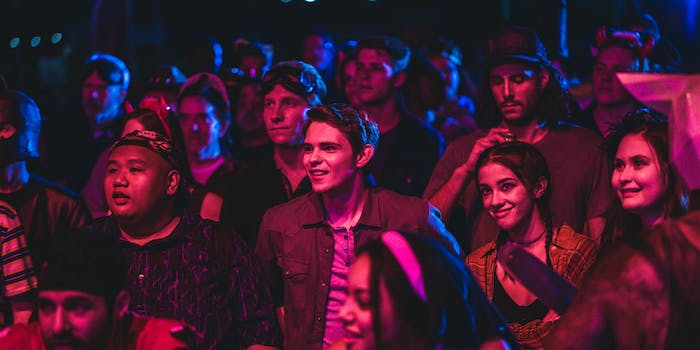 Rooster Teeth’s Blood Fest is a tribute to horror movies, and it’s hoping you get the references.

Directed by and starring Owen Egerton, Blood Fest, which debuted at SXSW on Friday, is for the horror heads, those who know all the conventions of the genre, who obsess over films and directors. In Blood Fest, that is embodied by three friends: Dax (Robbie Kay), Sam (Seychelle Gabriel), and Krill (Jacob Batalon). Dax has had an obsession with horror since his mother was murdered on Halloween night by one of his father’s deranged patients. He’s secured tickets to Blood Fest, the horror festival at the heart of Blood Fest, but his dad (Tate Donovan) forbids him from going, citing horror’s negative influence.

Egerton tells the Daily Dot that he got inspiration from Ernest Cline’s book Ready Player One, in regards to how to shape the world of Blood Fest and the horror tropes we’ve become accustomed to. “What a great use of finding the rules, or putting worth in knowledge that they have, that is trivial,” he says. “My son, who is 8 years old, knows how to kill a zombie. He hasn’t seen any George Romero movies, he hasn’t seen any zombie movies, but that’s now become a cultural rule. We understand that.”

Understanding the rules of horror is the framing device of Blood Fest. Once Dax, Sam, and Krill arrive at the festival, things quickly start to go wrong, as it’s revealed ringmaster Anthony Walsh (Egerton) is filming his own horror movie and murdering the attendees for content. There is a video game aspect to the film, as the gang visits different “levels” of the festival and beats different horror characters: zombies, vampires, and clowns. To make the film even more meta, the star of fake horror franchise The Arborist is in attendance (he kills people with landscaping equipment and trees), and at one point he has to face someone playing him.

Back in August, when the movie was filming in Austin, cast and crew gathered to film a scene involving a massive truck and a vampire confrontation. Before the scene, Batalon, who previously appeared in Spider-Man: Homecoming, admitted he doesn’t have an easy time with horror movies: “I love being scared, but I hate watching scary movies.” Kay leans more toward horror-comedies like Shaun of the Dead and sees a parallel with Blood Fest. Gabriel, who’s a standout as the take-charge Sam, cites Alien as her favorite horror movie.

Blood Fest is the third original film for Rooster Teeth—following up Lazer Team and its sequel—and its first attempt at horror. The references are a little ham-fisted. Blood Fest throws a lot at you. Donovan is a bit stiff as Dax’s dad, and the backstory for why his father is so hellbent on him not attending Blood Fest is not really addressed; we see that Dax’s mother was murdered in front of him as a child, but we don’t know why exactly their relationship is so strained. Or how his father, a psychiatrist, was able to use his patients as part of Blood Fest without an ethics violation. Or Walsh’s motivation for making this movie.

But perhaps it’s best to not think too hard. What Blood Fest lacks in plot it makes up for with a run of fun ways to kill someone. There’s a Zachary Levi cameo and a Tangled joke. Nick Rutherford stars as a pretentious, vaping director named Lenjamin who falls victim to Blood Fest and whose reanimation is pitch-perfect. You have to follow the rules of horror films to escape the horror film, and while Blood Fest gets a little lost along the way, its love of the genre—and satire of it—will speak to the obsessives.