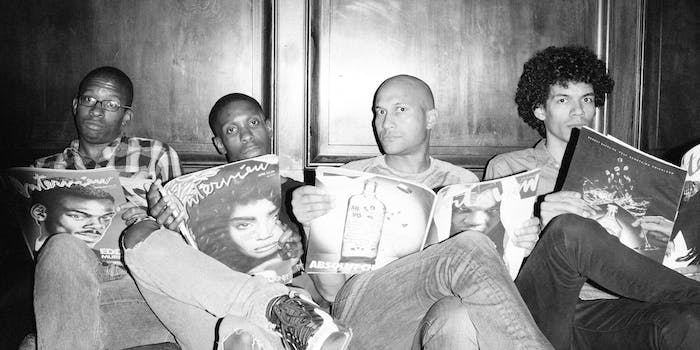 Why are there so few leading black men in big-budget films?

It’s not every day a Facebook rant leads to a podcast, but that’s exactly how the hosts of Black Men Can’t Jump (In Hollywood)—a new podcast that reviews Hollywood films with black male leads—got started.

“Watching Blue Streak and I really think this is Martin Lawrence in his most watchable starring role. His character is three-dimensional, smart and virile. [He] is so grounded and dynamic. And for me when it came out, it felt like, can Martin be in every movie? But then he had a public incident during the filming and everybody turned on him. All of his roles after that had less gusto. But it is really Eddie Murphy in Beverly Hills Cop quality performing. Hollywood, man, it will chew you up and spit you out.”

But James III stuck to his guns. Yes, he declared, this was a serious post, and the comment thread soon evolved into a deeper discussion of the question at the heart of his initial statement: Why is it that there are still so few leading roles for black actors in Hollywood?

Braylock messaged James III and Jerah Milligan, another friend and performer, and the three birthed their podcast soon after. The premise was simple: The three would gather, discuss and review films with leading men of color, and share the podcast online. What they didn’t anticipate was the attention and success that their project would quickly garner.

“In our first week, we got up to number 6 in iTunes in TV and Film [podcasts],” Braylock told the Daily Dot.

Since then the trio has been exploring the issues surrounding the roles black men can and can’t play on screen.

As performers, Braylock, James III, and Milligan share a vested interest in Hollywood changing its rules, but they don’t always see eye-to-eye on how that change can or will come about.

“It shouldn’t have to take that long though!” Milligan interrupted.

What’s refreshing about the podcast is evident when speaking to the three in person. There’s an authenticity to their good-natured banter, their playful ribbing of one another, and their ability to, at times, passionately disagree. In this way, they demonstrate the very thing that they’re arguing for: There’s no shortage of actors who can portray a variety of black male leads with diverse personalities and attitudes. If only Hollywood would make room for them.

While the Internet has in many ways democratized content, and we can look at webseries hits like Awkward Black Girl as examples of progress, it’s still extremely challenging to create diversity at the top. Explained James III, “In order to get those leading roles, I need someone like a Spielberg or Martin Scorsese to say, ‘I want to bring in a James III.’ I need someone in power to see me as an equal.”

So are those people in power listening? Time will tell. But the still-fledgling podcast already has sponsors and the hosts recently welcomed high-profile guest Keegan-Michael Key of Key & Peele.

“Chatting with Key was amazing,” said Braylock. “He was very engaged. He had so much insight and clearly was excited to talk about the topic of race in Hollywood, especially as it pertains to black actors.”

The hosts seem more gracious than star-struck. They spoke with equal enthusiasm about welcoming comedian Phoebe Robinson as a guest. For all their Hollywood aspirations, they remain incredibly down to earth.

This could be due to the fact that their truest aims are quite reasonable: to finally have access to ordinary roles, to not be type-cast as rappers or drug dealers, as athletes or a kid from the mean streets who overcame the odds. To simply play the part of an ordinary person.

“The end of [the pilot of Blackish] is the best line,” Milligan said. “‘I realized that day I’m not a black dad, I’m just a dad.’ I just want people to be people. There aren’t enough roles in Hollywood where black men can just be people.”