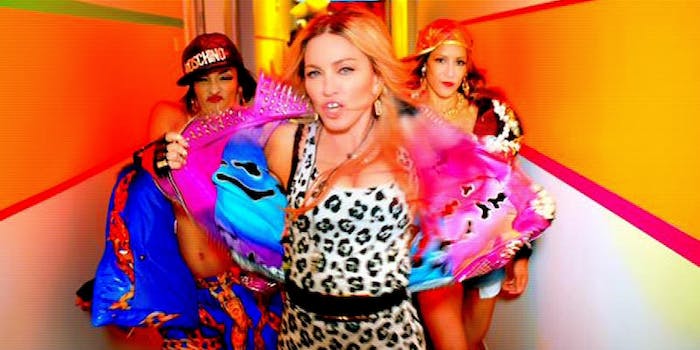 Bitch, she's Madonna. And so is everyone else.

Madonna may have fallen off the stage recently, but her new video proves the queen of pop isn’t going anywhere anytime soon. The 56-year-old superstar dropped her latest single exclusively on celeb-drenched super venture Tidal, and the video is appropriately packed with celeb appearances.

Basically, everyone in the entire universe is in the “Bitch, I’m Madonna” video.

Who drops in for a cameo? Let’s see: Nicki Minaj, Beyoncé, Katy Perry, Miley Cyrus, Rita Ora, Kanye West, Diplo, Alexander Wang, Chris Rock, a million dancers, a pair of hot girls in a bathtub with electrical tape covering their nipples, a cop in uniform, some sock puppets at a rave… and that’s all we could count before the bootleg YouTube post was taken down. Here’s another one—watch while you can:

On Twitter, users balked at the idea of signing up for a Tidal subscription just to gain access to the star-studded clip.

But it appears that Jay Z‘s streaming service has another video hit on its hands following the fervent success of Nicki Minaj and Beyoncé’s “Feelin’ Myself” exclusive last month.