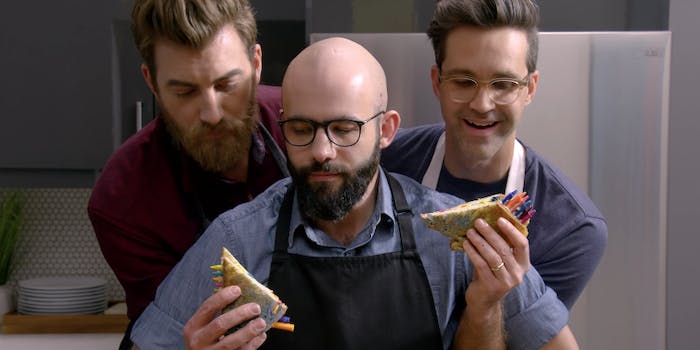 You can 'really taste that color.'

YouTube chef Andrew Rea of the popular food channel Binging with Babish is back with a new pop culture-inspired recipe, but this one’s a little less edible than usual.

In a collaboration with Rhett and Link for their talk show Good Mythical Morning, Rea recreated Ralph Wiggum’s iconic Grilled Crayon Sandwich from The Simpsons. In case you haven’t seen the season 16 episode “All’s Fair in Oven War” recently, Lisa’s classmate Ralph comes up with the recipe while unsuccessfully trying to qualify for the Auntie Ovenfresh Bakeoff. Its ingredients include bread and crayons (obviously), and when Chief Wiggum takes a bite of his son’s grilled creation, he’s surprised by the follow-up question, “Can you taste the thumb tacks?”

Obviously, it’s not the most delicious recipe to recreate, but it’s definitely a strong visual.

“Today we’re going to be cooking with an irresponsible amount of children’s art supplies and testing the limits of the term non-toxic,” Rea jokes at the beginning of the clip.

There’s definitely more crunch than you’d expect from a typical sandwich, but Rhett and Link powered through their test bites, claiming you could “really taste that color.”

Last time we checked in with Rea, he was mastering some favorite Harry Potter treats.