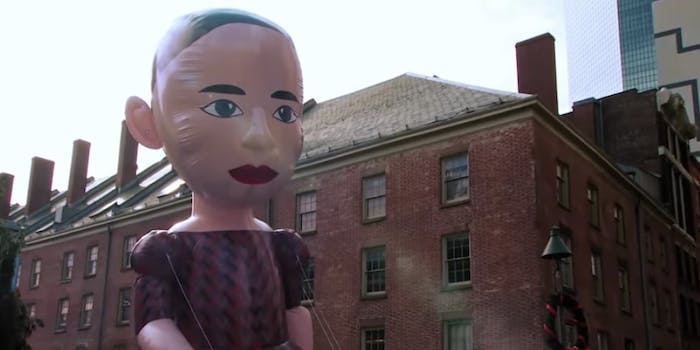 Billy Eichner hosts his own Thanksgiving parade with Katie Couric

This 'Billy on the Street' clip shows us what we should really be thankful for.

While the rest of the world celebrates pilgrims and budding pop stars at annual Thanksgiving parades, Billy Eichner decided to tribute the true Thanksgiving stars, like Maggie Gyllenhaal, in his own event.

For an upcoming episode of Billy On the Street, Eichner instituted his own Thanksgiving Day Parade to celebrate who he believes are the icons of the season. He even called in the big guns, tapping Katie Couric as co-host for the inaugural event. The pair discuss the rundown of quirky floats, and instead of a marching band there’s a march of the publicists. Most impressively, Eichner has commissioned giant balloons of luminaries like Rooney Mara and Sean Penn to float on by.

Eichner finishes off the parade as Santa himself, accompanied by Mrs. Claus in the form of Elena, the series’ most iconic “Quizzed In the Face” contestant from seasons past.

Screengrab via Billy On The Street/YouTube