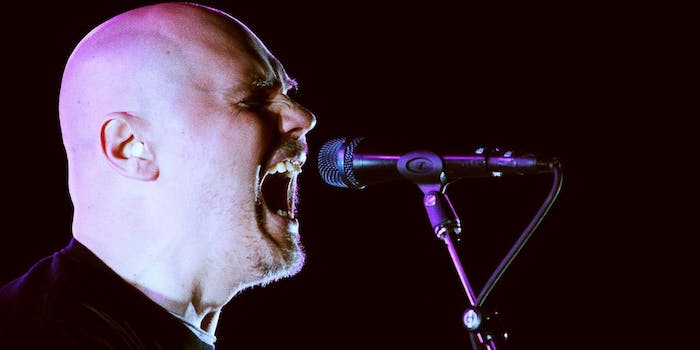 Despite all his rage, he is still just a… Donald Trump supporter?

Smashing Pumpkins frontman William “Billy” Corgan just weighed in on the New York businessman’s presidential campaign, which he sees as a much-needed “shake-up” of the current political system.

“I think what’s cool is Trump’s running chaos theory,” Corgan told fans at a Q&A in the notorious swing state of Ohio. He likened politics to the music business, noting that artists often forfeit control to the executives until someone—perhaps a musical trailblazer like Corgan himself—“comes along and fucks it all up.”

Corgan continued his alt-rock-inspired dropping of f-bombs, noting that he doesn’t align with Trump politically. “I think it’s good that he’s fucking it up, because whether or not he’s the guy, obviously the political class doesn’t want him there. It’ll open up a political dialogue.”

The “1979” singer didn’t comment on Trump’s recent dismissal of Univision anchor Jorge Ramos from an Iowa press conference for questioning the candidate’s plan to deport all 11 million undocumented immigrants. The Tibetan Freedom Concert performer also didn’t mention what he thinks about Trump’s overtly racial, hate-crime-inspiring rhetoric, which has arguably propelled him to the front of the GOP race.

Corgan is currently touring with the newest lineup of Smashing Pumpkins in support of their recent album, Elegy.