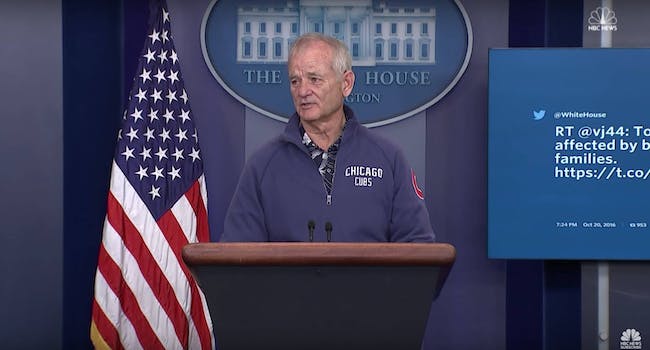 Bill Murray crashed the end of a conference in the White House press briefing room on Friday. There’s literally no way to explain his presence other than the fact that it’s Bill fuckin’ Murray and he can do whatever the hell he wants.

What did the actor want to discuss with an eager press corp? Why, baseball, of course.

Unlike President Obama, who grew up an Oakland A’s fan before making the switch to the Chicago White Sox, Murray is a diehard Chicago Cubs fan.

When a journalist coyly addressed him as Mr. President and asked for his thoughts on the Cubs making it to the World Series, Murray was quick to give a rousing yes and also talk smack about the Los Angeles Dodgers:

“I feel very confident that Clayton Kershaw is a great, great pitcher, but we’ve got too many sticks… We also have a little bit of autumn in Chicago. You don’t get that in Los Angeles. Trees just die in Los Angeles. In Illinois, they flourish.”

The Cubs and Dodgers are locked in a brutal NLCS battle with Chicago up 3-2 in the series. Being that it’s the Cubs and they’re cursed as fuck, they’re probably not going to make it to the World Series—a place they haven’t been since 1945.

Not even a Back to the Future prediction could get the Cubs to the World Series last year. Murray’s prediction most likely added even more bad juju to his beloved baseball team. Better luck next year, I guess.