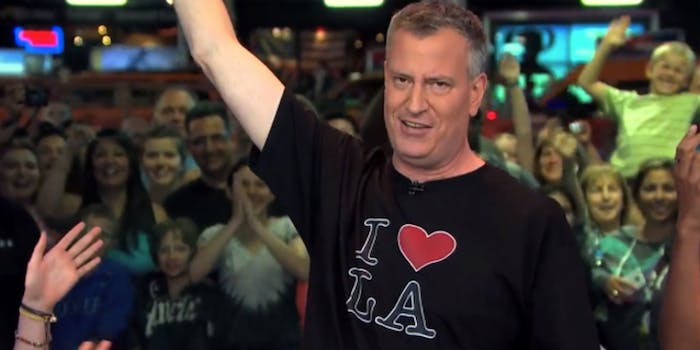 The L.A. Kings beat the New York Rangers last Friday to win the Stanley Cup, and fans were really excited. A lot of bets were placed on the game, including one between NYC mayor Bill de Blasio and Los Angeles mayor Eric Garcetti. If the Kings won, de Blasio would have to sing “I Love L.A.” If the Rangers won, Garcetti would sing “New York, New York.”

This would all happen on Jimmy Kimmel Live, of course.

Well, de Blasio appeared on the show last night to honor that bet, and it was awkward. Via satellite, the mayor, accompanied by children from the 52nd Street Project in Manhattan, dove right into a karaoke version of the Randy Newman song. The kids all found the right groove, but de Blasio was always a few steps behind, making for a true “Daaaad, you’re embarrassing me” moment.

They didn’t do the whole song, which is actually a bit of satire directed at L.A.’s many contradictions. However, de Blasio did send out some Gray’s Papaya hot dogs, which Garcetti refused to eat, calling them “a steaming bag of New York garbage.”