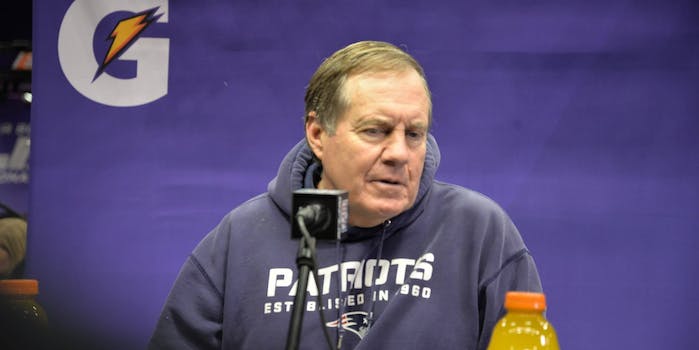 Chances are, Bill Belichick knows all about what he claims not to know.

Pro Football Focus (PFF) has convinced much of the football world that its brand of metric-based stats is vital for teams, players, and fans to understand the game.

Bill Belichick is happy to disagree with that assessment. Here’s what the Patriots coach had to say Friday when asked about it by reporters.

Bill Belichick cares not for your precious nerd metrics. pic.twitter.com/vjwEjNOUgn

But here’s something else to consider: An industry source told the Daily Dot on Friday that PFF counts 24 NFL teams as clients, up from 19 last year. That means 75 percent of the 32 NFL teams pay PFF for its services, and that means there’s a pretty decent chance the Patriots are one of them.

Eventually, PFF figures it can convince 30 teams to do business together. It’s the way the world is changing, though perhaps Belichick is trying to avoid any discussion about an online world. After all, look at him struggle to talk about social media.

Here’s also something to remember: Belichick is perhaps the greatest NFL coach of all time, and he’s also one of the most adaptable. His fans might believe him when he says he eschews anything related to the metric websites. But chances are he knows exactly what they are, what they do, and how valuable they can be.