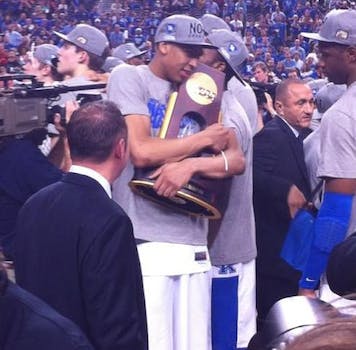 As the Kentucky Wildcats cut down the net on Monday night, the big blue nation celebrated on Twitter.

The Kentucky Wildcats dominated the Kansas Jayhawks for the majority of Monday night’s NCAA championship game. But in the final few minutes, the Jayhawks make an impressive push, closing the double-digit scoring gap into a two-possession game.

That final intensity seemed spilled over onto Twitter as well.

The hashtag #bbn, which stands for big blue nation, was mentioned 89,000 times during the last three minutes of the game, according to the official March Madness Twitter account.

“Congratulations, #BBN! I’m so happy we could bring home #8,” tweeted Kentucky coach John Calipari after defeating Kansas 67-59. “Remember, let’s celebrate with the class and respect of a national champion.”

Even though the NCAA Championship didn’t set any Twitter sports records, the big college game further proved how sports continue to be a force to reckon with on the microblogging site.