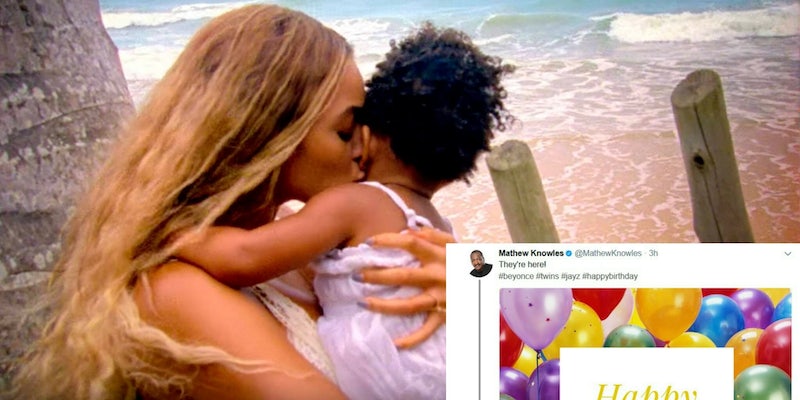 Beyoncé’s dad confirms that she’s given birth, but faces wrath from Twitter users for doing so

The real question: Did he have permission to release the news?

Ever since Beyoncé announced she was pregnant with twins, fans have been going bonkers trying to figure out when she’ll give birth and what the result will be.

Though there have been multiple reports in the past day or so that the family of three is now a family of five, we hadn’t heard a word from Beyoncé, Jay Z, or Blue Ivy. We haven’t heard from any family member, actually. Until now, that is.

That’s Beyoncé’s dad who made his special announcement on the morning of Father’s Day.

It’s been well known that the relationship between Beyoncé and her dad—who used to manage Destiny’s Child—has been rocky. There were rumors that his daughter had not invited him to the hospital for the birth of her twins, something Knowles recently told Fox 26 in Houston was a “bold lie.” He also said he communicates with his daughters, Beyoncé and Solange, weekly.

But knowing that history, many Twitter users didn’t seem to appreciate Knowles’s announcement that he, once again, was a grandfather.

That was for Beyoncé to tell not you pic.twitter.com/Knf7zYYqKO

So, stay tuned for confirmation from either Beyoncé or Jay Z. It seems likely that the twins really are here. But if Knowles didn’t have permission to release the news, it might not be such a great Father’s Day for him after all.