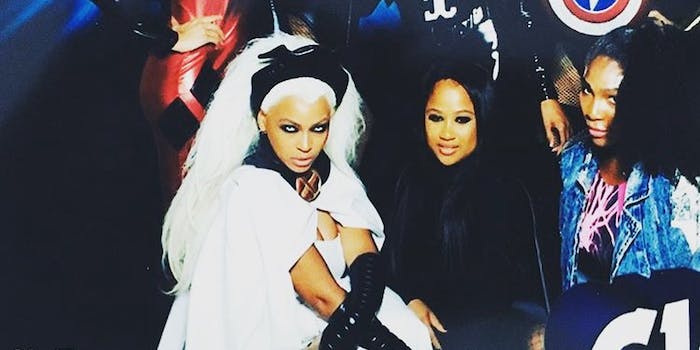 Beyoncé has been pretty quiet lately, but all it takes is one small glimpse of the singer to remind people why she’s called Queen Bey. At Ciara’s birthday party on Saturday (Oct. 24), lots of celebrities arrived wearing superhero costumes, but Beyoncé undeniably won the night in her appearance as X-Men character Storm.

I met Beyoncé tonight and she couldn't have been more sweet. And shares my love of costumes. @Beyonce

Comedian Jeff Dye’s up close image of the star’s costume shows that she perfectly nailed all of the details of the superhero’s comic book look. The long white hair, white eyes, and X-Men insignia are all dead-on.

RELATED: Clown are Maine’s ‘It’ Halloween costume and other fun facts

Ciara also looked fantastic as Catwoman, but she didn’t bring the same level of detail to her costume.

And when the entire squad—Beyoncé, Ciara, Kelly Rowland, Angie Beyince, Serena Williams, and a few others—joined up for a group photo, the results were obvious: Beyoncé is not just always on beat, she’s also always in character.

She managed to make kneeling in the foreground look like an epic pose ripped straight from the pages of a comic book. Note that Beyoncé managed to keep her Storm-inspired mean mug on throughout all of the pictures. When the Queen decides to put on a costume, she remains totally committed to the character.

RELATED: Watch Jay Z passionately dance along to Beyonce at ‘Made in America’ concert

It remains to be seen if this counts as Beyoncé’s Halloween costume — but in 2014, she dressed up twice, as Frida Kahlo and Janet Jackson, so there are probably more Bey costumes to come before Oct. 31.