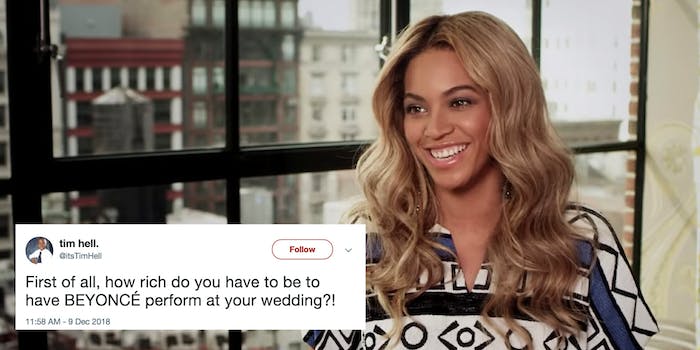 How much money do you need to book Beyoncé for your wedding?

Beyoncé recently performed at the private wedding of the richest man in India’s daughter, leaving many social media users wondering exactly what it costs to book the star for a private event.

Over the weekend, Beyoncé performed at a private wedding in India. pic.twitter.com/3O3Areo1MQ

First of all, how rich do you have to be to have BEYONCÉ perform at your wedding?!

Beyoncé performed at the pre-wedding party for 27 year-old Isha Ambani and her fiancé, 33 year-old Anand Piramal, CNN reports. The couple will officially wed on Wednesday. While it is unclear exactly how much it cost to schedule Beyoncé for the performance, celebrity booking site Capital Xtra reports the singer’s flat rate is at least $2,000,000.

People are shocked that Beyoncé was only the pre-wedding performer, rather than being hired as the performer for the actual wedding. Others simply cannot fathom the amount of money required for her to even show up.

You know your dad is rich when he can afford to hire Beyonce to sing at your PRE-wedding party. What do you do for the actual wedding — pay someone to resurrect John Lennon? https://t.co/lc1AbIFyjq

Frederick Joseph (@fredtjoseph) had one bright idea, though:

If Beyoncè performs at my wedding y’all are buying tickets to get in. https://t.co/vSgWvEVit8

If Beyoncé was the performer, how much would you sell tickets to your wedding for?