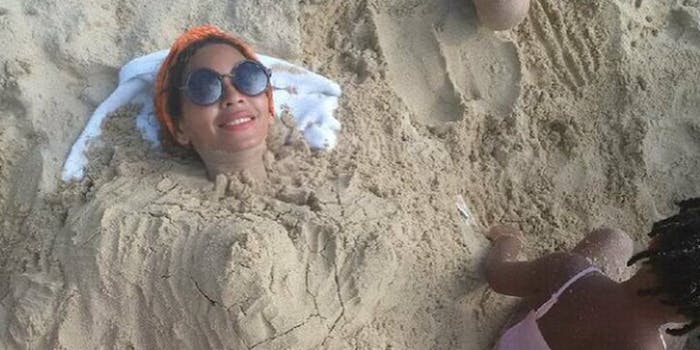 Is there another Bey-by on the way?

Leave it to Beyoncé to potentially confirm pregnancy rumors by releasing a picture of herself buried to her neck in sand.

On Sunday, the superstar released a new Instagram photo showing her at the beach, buried in sand, with a rather large stomach. Now, that could be some creative sand artistry, or Queen Bey could be trying to tell us something.

There’s no caption on this most recent photo, leaving fans’ imaginations running wild. Bey is no stranger to a dramatic reveal of impending offspring. When she was pregnant with Blue Ivy, she iconically unbuttoned her blazer at the conclusion of her 2011 VMA performance to lovingly stroke her belly. The move created more buzz than the award show itself.

If Bey-by No. 2 is truly on the way, we expect no less from Beyoncé than a cryptic beach shot to let the world know.