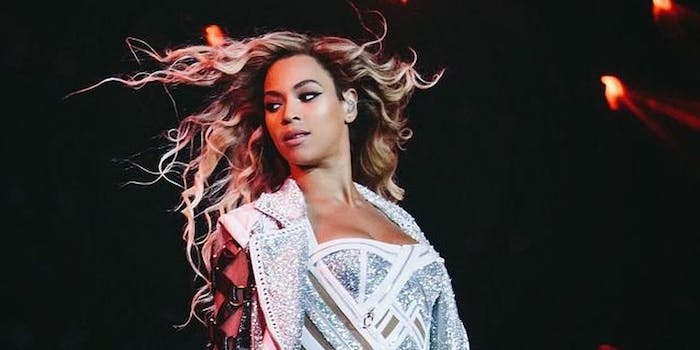 Continuing with the trend of dropping tracks in the middle of the night, Beyoncé went ahead and left us a nice Sunday morning gift: A new remix of “Flawless” with Nicki Minaj.

The track, which debuted on Beyoncé’s wesbite, gets some nice flow from Minaj, who recently experienced some online pearl-clutching from the “dads of hip-hop,” after the album cover for new single “Anaconda” was deemed too risque. The “Flawless” remix also references the now-infamous elevator incident between Jay Z and Solange: “Of course sometimes shit goes down when there’s a billion dollars on an elevator.”

Minaj and Beyoncé have always existed in a similar realm, but this is the first time they’ve collaborated. Hopefully it isn’t the last. It seems to have invigorated the Internet on this lovely Sunday.

Before and after listening to the ***Flawless Remix #FlawlessRemix pic.twitter.com/LANIMhyidJ

Beyoncé and Nicki went into the studio like: #FlawlessRemix pic.twitter.com/nX8HL4Pikq

Weekend, complete. However, beware: Too much Bey could be dangerous for your computer’s health.