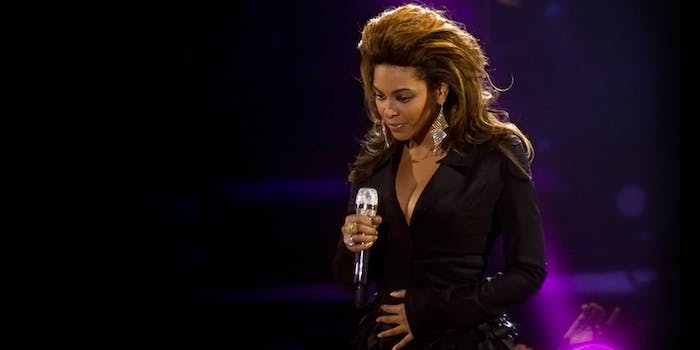 Queen Bey takes passive-aggressiveness to new heights by ducking out of the Kimye nuptials, but congratulating the couple on Instagram.

If you’re well-versed in Degrassi: The Next Generation trivia, you know that Beyoncé and Kim Kardashian are basically the Paige and Manny of Hollywood. There was that time Beyoncé allegedly snubbed Kim Kardashian at a music festival, and that other time Bey tried to avoid a stop-and-chat with Kim at her dermatologist. And that time Kim tried to steal Beyoncé’s lead role in a Jay and Silent Bob-themed musical by stealing a school bus and driving across country to audition. (Oh, wait, that’s Degrass, my b.)

When it was reported that Bey and Jay weren’t attending Kimye’s opulent Florentine wedding this weekend, some speculated that tensions between the two had reached a boiling point. But if Beyoncé’s Instagram is to be trusted, that apparently isn’t the case. While Bey and Jay were reportedly sunning themselves in the Hamptons, the singer blessed the Kimye nuptials by posting a portrait of the couple from a Vogue photo shoot, marking one of the first few times she’s acknowledged Kim:

The sweet message, however, didn’t quell the suspicions of Beyoncé’s Instagram followers, who speculated on the reasons behind her absence from the Kimye nuptials. “Girl yo dirty ass coula went to them people wedding,” one wrote. Another suggested that Bey and Jay’s absence was related to Jay-Z’s leaked elevator fight with Solange Knowles last week, which many have suggested stemmed from Jay’s relationship with designer and Kardashian BFF Rachel Roy.

Nonetheless, we share Bey’s message of felicitations for the happy couple—and whatever the reason for Bey and Jay’s absence, I’m sure it’ll all be revealed on next week’s episode of Degrassi.