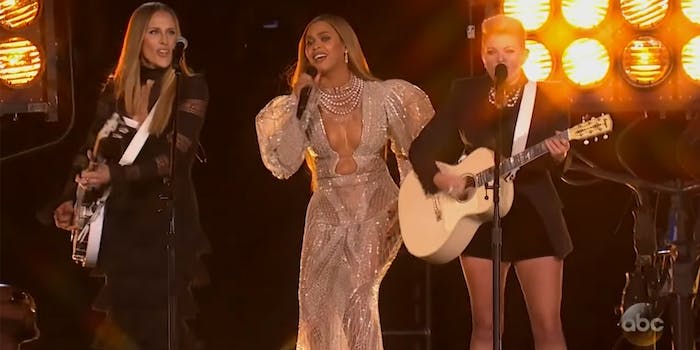 It's what we never knew we needed.

Beyoncé had plenty of tricks up her sleeve when she surprised us with her latest visual album Lemonade back in April, but many might not have suspected “Daddy Lessons,” her approach to country music (even though the genre has deep black roots).

So when rumors swirled that Beyoncé was in Nashville ahead of the Country Music Awards broadcast Wednesday night, people assumed she would perform the song. But it wasn’t until she took the stage—without an introduction because Beyonce needs no introduction even when she’s on foreign territory—did we find out just which artists she’d be collaborating with.

The Dixie Chicks, who covered “Daddy Lessons” at their own concert just one week after Lemonade’s release, proved to be a perfect choice. They even mixed in a bit of their 2002 song “Long Time Gone.”

To top it all off, the song is available to download legally for free through Beyoncé’s Soundcloud page.