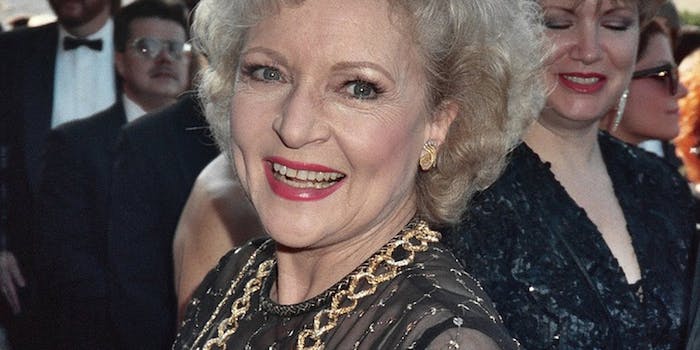 Her conversation with an empty chair would be so much funnier than Eastwood's.

What would a political convention be nowadays without a famous old person rambling on stage?

Not to be upstaged by actor Clint Eastwood lecturing to an empty chair at the Republican National Convention, one proud Democrat has started an online petition to bring actress Betty White to the party’s big convention this week.

“Clint Eastwood, the Republican’s ‘mystery guest’ at the RNC, gave a bad name to older Americans everywhere with his absurd and awkward-to-watch introduction of Governor Romney,” wrote Peter Slutsky on his Change.org petition. “Take action today if you want to see a real (old) Hollywood icon get a political introduction right!”

The petition is just 1,600 digital signatures shy of its 7,500 goal to have the nonagenarian speak at the Democratic National Convention in Charlotte, North Carolina. It has also inspired the Twitter hashtag #BettyWhiteDNC, which has been mentioned more than 2,600 times since Aug. 31.

“As a woman, I respect Betty White. I love her self deprecating [humor] as well as her caring ways. She loves animals, and anyone who does is usually a really OK person,” Marilyn Durham wrote on Change.org. “She can speak for w0men who have been done a great disservice by the Republican party in this state and nation, yet I believe she can be heard!”

Eastwood, 82, launched a popular meme Thursday after he berated an empty chair meant to represent President Barack Obama on the RNC stage. The more than 10 minute long diatribe made the Academy Award winning actor the laughing stock of the Internet.

White currently stars in a reality comedy series call Betty White’s Off Their Rockers and sitcom Hot in Cleveland where she plays a caretaker. Slutsky is confident White, 90, would upstage Eastwood thanks to her improvisational skills. Even so, it’s probably a good idea to keep the DNC stage clear of any empty chairs.