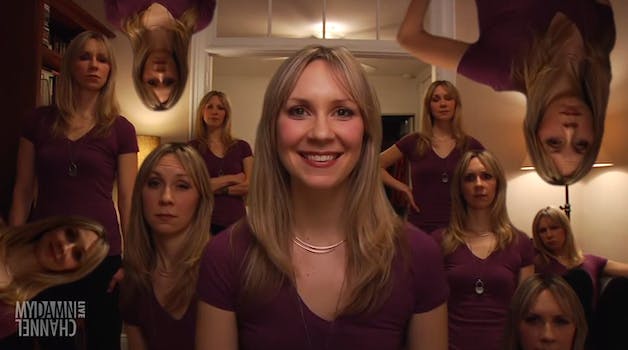 Meet Beth Hoyt, your host for the future of Internet TV

The lovely host of My Damn Channel Live is introducing a late-night format to YouTube, capturing what she calls "interactivity of the Internet."

How tall is the lovely Beth Hoyt? She talks about her height enough. The people who watch her deserve to know.

“I’m 5’11,” she revealed last week to the Daily Dot. “I’m not a giant. I don’t walk down the street and get looks like, ‘That girl must play basketball.’ But I’m not exaggerating when I say I’m tall. Put some heels on me and I’m out there.”

Hoyt pokes fun at her height because self-effacing humor’s practically in her job description.

The Wisconsin native is the host, writer, and chief personality on My Damn Channel Live, a daily YouTube variety show two months into its first season. The program’s helping bridge the gap between the Google-owned company’s newfound attention for original, programming channels and YouTube’s more traditional, DIY content creators.

My Damn Channel Live is the all-encompassing roundup of an original programming channel that launched in 2007, was named one of the 50 Best Websites of 2011 by Time magazine, and now plays host to over 30 new original comedy series that play throughout the week.

Every afternoon at 4 pm Eastern Time, Hoyt rolls through the highlights and previews of the YouTube channel’s content. She brings celebrities into the studio for interviews and showcases videos from the best personalities she can find on the Web.

“We are the first live streaming comedy show on YouTube,” Hoyt said. “We’re a new form, and I suppose I’m the ringleader for it all. I’ll take you through what this website has to offer in an entertaining show.

“Our goal is to have a late-night format with all the commentary and interactivity of the Internet.”

That nod to late-night talk shows means that My Damn Channel Live viewers should expect guests—and lots of them. Hoyt hosted Justin Halpern of Shit My Dad Says on Wednesday, comedian Michael Showalter has come through to play Go Go Goddess, and comedian David Cross stopped by May 9 for a live interview and Tumblr survey.

She also mentioned bringing in megaphone-voiced comedian Gilbert Gottfried, who has a show on My Damn Channel called Gilbert Gets It, wherein Gottfried waxes on millennial fascinates like FourSquare and Gender Cakes. And Hoyt said that she wants to increase the time the site spends with the amateur-style YouTube personalities who helped make the site what it is today.

“We’ve already featured a few different bloggers and people we like to watch on YouTube,” she said. “The idea’s so new, but do want to provide a platform for people who make their own videos and can promote their own stuff.”

It all goes down over a 10-minute stretch that’s aired live and with very little on-set prep work. For Hoyt, the challenge lies in maintaining a whimsical personality while keeping in mind that she’s always one slip-up away from her entire viewership having a laugh at her expense.

“I try to be aware of it,” she said. “I really just put my foot in my mouth and work on it constantly.

“As much as I try to control things, I can’t. I’m just hoping through this whole process that it’s going to be okay. I think the reason that it works is because the people who watch My Damn Channel Live are looking for something that’s really genuine. They can sense the falseness better than anybody.”

It’s live TV: Beth Hoyt’s got to stay on her toes. Just not her tippy-toes, though. Because then she’d be really tall.