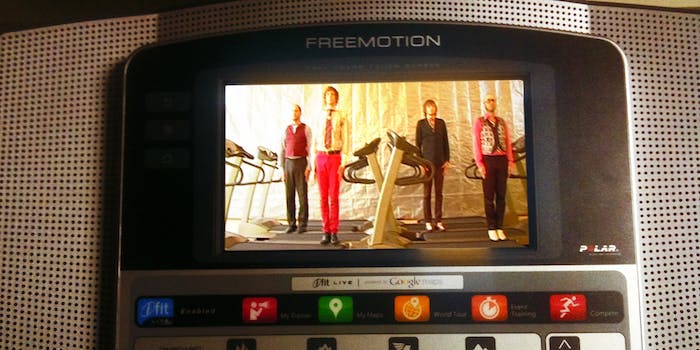 5 amazing treadmill dance routines that will make you sweat

From OK Go to 'Uptown Funk,' treadmill dancing is a YouTube staple.

Walking on a treadmill is difficult enough, but some YouTubers take their workouts to the next level and add sick dance moves to the mix. From bands whose music video creativity earned them a spot in YouTube history to dancers working out to buzzing radio singles, the world of treadmill dancing is vast and entertaining. We compiled the five best treadmill dance examples from YouTube.

Sure, it’s an advertisement for Nordic Track, but the sheer volume of treadmills makes this a must-watch. With professional dancers doing a choreographed routine that spans 40 treadmills, it may not have the homespun style of most of the rest of our list, but it’s an impressive video nonetheless. Besides, you can’t have treadmill dancers without a company making a treadmill for them to dance on.

Some treadmill dancers don’t need music; their art is all in the moves. Marcus Dorsey is one such man, and he captured millions of hearts last year when a clip of him dancing across treadmills at a fitness center went viral. He even landed a guest appearance on The Doctors to show off his fitness achievements. He’s reportedly dropped two sizes treadmill dancing.

This man not only shows off his moves to the Maroon 5 track “Moves Like Jagger,” he also lip syncs along with some interpretive dance moves to boot.

The newest treadmill dance to hit the market, acrobatic dancer Carson Dean does a solo routine to Mark Ronson and Bruno Mars’ latest hit, “Uptown Funk.” It’s a song that makes you want to strut, so endless strutting on a treadmill makes perfect sense. The public agrees, to the tune of 1.4 million views in only a few days.

You can’t really consider treadmill dance videos without respecting the grandfather of them all. OK Go made massive digital waves when their video for “Here It Goes Again” hit YouTube in 2006, featuring an elaborate treadmill dance. It had 50 million views, was taken down and reposted, and now has 25 million views and counting. It spring-boarded OK Go to mainstream recognition and set off a series of other elaborate videos from the group. They’ve even performed the iconic treadmill dance at live events, so there’s no mistaking their treadmill prowess.