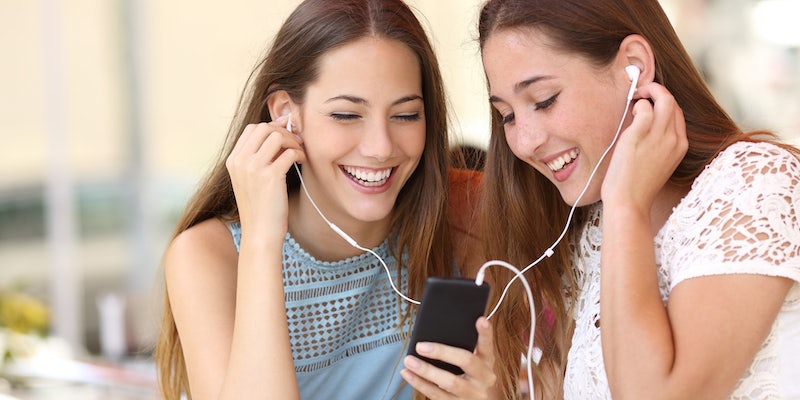 What's a life without your BFF?

Whether it is your childhood BFF, or your dog, friendship is one of the greatest gifts we can own. Songs about love and other struggles can be found by the thousands, but what about your best friend who was there for you through the highs and lows of this world we live in?

Friends give us life, let’s celebrate that. Listed below is a curated list of songs that celebrate the joy friendship gives us all—with a Spotify playlist down below for further listening.

It’s the theme song for one of the most beloved sitcoms, which is literally called Friends. Gather up your crew for a cup of coffee, discuss your tough life decisions, and laugh it off at the end of the day. Of course this should be a part of the friendship playlist, and ideally the first.

2) The Beatles – ‘With A Little Help From My Friends

The Beatles released this song in 1967 on St. Pepper’s Lonely Hearts Club Band. The iconic musicians remind us that friends are always there for you, and pick you up when you need it most.

3) Andrew Gold – ‘Thank You For Being A Friend’

Released in 1978, “Thank You For Being A Friend” is a textbook, simple ode to having your back. It’s a Hallmark-rich thank-you card.

Ben E. King blessed us with an R&B classic in 1961 that has moved hearts and mountains. The soulful tune has scaled the Billboard charts twice, both when it was first released and re-released as the theme song for the 1986 movie Stand By Me.

As Bill Withers says “we all need somebody to lean on,” and a friend is there for you when times are difficult. The Withers 1972 classic hit No. 1 when it was released, and was revisited with a Grammy when Club Nouveau covered it in 1987.

The Canadian dream-pop duo from Montreal, Majical Cloudz, released this sweeping track on 2013 album Turns Turns Turns. The minimalist synth-pop band breaks away from the normal dewy-eyed ballad and tells a simple story about a best friend named Neal.

8) LCD Soundsystem – ‘All My Friends’

This seven-minute jam makes you realize who your real friends are after you have left the days of partying until dawn in your 20s behind.

Of Montreal sings about a bromance so strong, the two might even have hit it off if it wasn’t for a mutual liking of the opposite sex. This quirky tune plans out the entire scenario of their friendship turned relationship, if Tim was only born a girl.

Francis and the Lights, Bon Iver and Kanye West worked together to release this song in August. In the music video, the three icons in pop culture danced together in a synchronized skit, while harmonizing the chorus in this uplifting song about blooming friendship.

Nobody is messing with Kanye West, Big Sean, and Jay Z’s clique. This crew is messing around when it comes to running the business, and their posse is very extensive. How do we get the invite?

Released in May on his mixtape Coloring Book, Chance the Rapper reveals the tough truth about summer friendships. Some friends are made fast, leave us behind, or stay awhile.

“Fuck all you n****s, except my n****” is the blunt lesson of this hip-hop jam. It’s straightforward and to the point. DJ Khaled and Drake don’t need new friends because their crew is already the G.O.A.T.

“I’ll Be Missing You” is an homage to friendships past. Diddy captures the emotion of losing a loved one, remembering the good times, and letting them know that you will remember them through every step you take.

This old-school rap jam is the perfect song to turn up in a cramped car with the top down, rolling through the streets of your neighborhood. The song was released in 1995 and was featured on the soundtrack of the ’90s cult classic, Clueless.

MF Doom released an album in 2004 called Mm..Food centered around friendship and food. “Deep Fried Frenz” is about finding out who your true friend is: Someone who you can split a plate of nachos with.

Remember how everyone was your friend, and the first day of school was the best day ever? Life was simple, and Jack White captures those dear moments with a high-pitched tune and vintage guitar strings.

Spice Girls made girl power a global phenomenon. There’s no way anyone can break the power of friendship between a strong group of girls, not even a boy. If you want to get in with the crew, you have to make sure you fit in with your lover’s friends first.

This ultimate “bro” song was released in 1976, and embodies the reunion of a group of guys who haven’t seen each other in a long time. It’s hitting the town with your best crew, re-living the good old days.

Throwback to this 2000s jam, also known as the high-school graduation song by default for at least a decade. Vitamin C sings about moving forward, getting those “big jobs,” remembering the good times, and the friends made along the way.