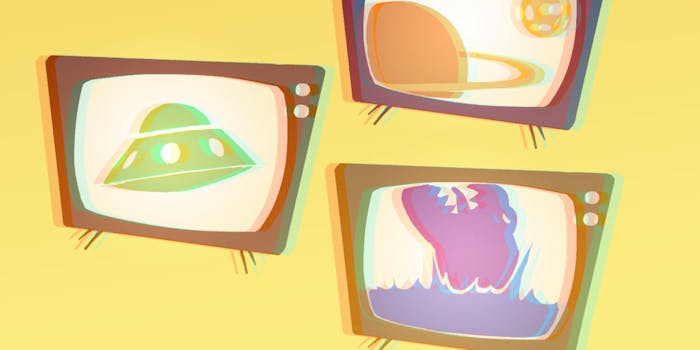 7 sci-fi artifacts you can watch for free on YouTube

Time to get lost in space (and time).

Looking for some vintage visions of the apocalypse or ill-fated interstellar odysseys? Dive into YouTube and get lost in these classic sci-fi titles.

With Back to the Future celebrating its 30th anniversary this month, it’s strangely appropriate that we open with a show probably best known these days for being appointment television for one George McFly. Science Fiction Theatre ran Saturday nights in syndication from 1955-1957, airing 78 episodes featuring stories on everything from space exploration to time travel to flying saucers. Keep a keen eye out and you might notice familiar faces such as Vincent Price and Star Trek’s DeForest Kelley putting in appearances. Science Fiction Theatre may not have earned the acclaim or left the legacy of the later shows on this list, but it’s a fascinating slice of TV history. You can find tons of episodes on YouTube, starting with the premiere episode embedded below.

Not to be confused with the current Fox comedy series starring Will Forte and Kristen Schaal, this Last Man on Earth is one of several adaptations of I Am Legend by Richard Matheson. Vincent Price stars as Dr. Robert Morgan, the last human left alive (as far as he knows) in a world that’s been obliterated by a vampire plague. He spends his days hunting the creatures while they sleep; at night, he secures himself inside his home and waits for the dawn. His dreary and repetitive life is thrown for a loop when he meets another survivor named Ruth, and learns that she’s part of a group trying to rebuild society. However, there’s more to Ruth than first appears. For bonus points, marathon this one with Charlton Heston’s The Omega Man and Will Smith’s I Am Legend.

Silent Running generally stirs strong feelings of either nostalgia or derision for sci-fi fans old enough to remember it. It’s an easy target for mockery, since its environmental message is just so darned earnest, but I have fond memories of watching a VHS tape of Silent Running my dad had recorded off TV at some point, and as a kid I loved the goofy robots. Bruce Dern stars as Freeman Lowell, a botanist on a large vessel carrying four domes filled with trees and other vegetation salvaged from an Earth where virtually all plant life has been destroyed. When the company backing the mission decides trees are stupid and they’d rather have their spacecraft available to haul space petrol or whatever, Freeman isn’t having it. He kills the other three crewmen, fakes the ship’s destruction, and hijacks the one remaining dome, desperate to preserve his homeworld’s greenery. Silent Running was directed by Douglas Trumbull, a veteran special effects supervisor who worked on films such as 2001: A Space Odyssey and (eventually) Blade Runner.

Based on the “Vic and Blood” stories by Harlan Ellison, A Boy and His Dog is the story of an odd partnership between two people trying to make their way through a nuke-blasted post-apocalyptic wasteland. Well, one person and a dog, but the dog is telepathic and probably actually smarter than the guy, so respect is due. A decade before Miami Vice made him a household name, Don Johnson starred as Vic, an 18-year-old who’s known no other life than scavenging through the remains of what used to be the American southwest. With him always is Blood (voiced by Tim McIntire), who lost the ability to hunt in the experiments that made him telepathic. So the two survive in symbiosis, with Vic helping find food for Blood, and Blood helping find women for Vic (it’s not a particularly woman-friendly apocalypse). After being seduced by a mysterious girl named Quilla, Vic encounters an underground society and an all-too-ironic fate. A Boy and His Dog won the 1976 Hugo for Best Dramatic Presentation.

Based on Ursula K. Le Guin’s Hugo- and Nebula-nominated 1971 novel, The Lathe of Heaven was produced by the New York public television station WNET, with Le Guin herself involved with nearly every aspect of the film. That alone would make it worth seeking out, but the movie managed to earn both a Hugo and a Writers Guild Award for screenwriters Roger Swaybill and Diane English, proving you don’t need a massive budget to make top-notch science fiction. Bruce Davison stars as George Orr, a man who insists that his dreams have the ability to alter reality—and not in the hippy-dippy “If you set your mind to it, you can accomplish anything” way. We’re talking actual, physical changes in the fabric of space-time. Naturally, no one believes him at first, certainly not the doctor charged with treating him. But once Dr. Haber (Kevin Conway) realizes Orr isn’t kidding, he begins trying to use his patient’s abilities to remake the world for the better. But you know what they say about the road to hell.

Before Jar-Jar took up the mantle, Ewoks were the go-to complaint for irate Star Wars fanboys ranting that George Lucas had lost his way. Well, whatever you think of the diminutive warrior teddy bears, Lucas rode their furry little backs all the way to the bank, and part of that marketing blitzkrieg included these two made-for-TV movies from the mid-’80s, released during a time when the original trilogy had been wrapped up and before the Expanded Universe really got kicking, a time when fans were eager for any new Star Wars material. Unfortunately for anyone who wasn’t a small child, that new material came in the form of Ewoks, Ewoks, and more Ewoks. Both Caravan of Courage and The Battle for Endor are set on the forest moon that was home to the Ewoks, with the stories unfolding prior to the events of Return of the Jedi. They follow the Towani family, who crashed their vessel on Endor and must now deal with the exotic wildlife—both the cute-and-fuzzy ones and the less friendly varieties.

As much as we may have a fondness for the Ewok movies so long as we’re not actually forced to watch them again, we’ll wrap up this list with something a bit more badass. The CGI-animated Clone Wars series became a huge hit for Lucasfilm, and holds the distinction of being one of the few bits of Expanded Universe material to survive the transition into the new official continuity heralded by the Disney buyout and The Force Awakens. But some five years before that vision of the Clone Wars, there was another. Produced by Cartoon Network in collaboration with Lucasfilm, the 2003 Clone Wars series was the brainchild of Genndy Tartakovsky, the creator of Dexter’s Laboratory and Samurai Jack. While his Emmy-winning take on The Clone Wars has since been largely overshadowed by its longer-running successor, it’s an absolute action-packed blast, and well worth revisiting given how pumped everybody is about Star Wars right now.