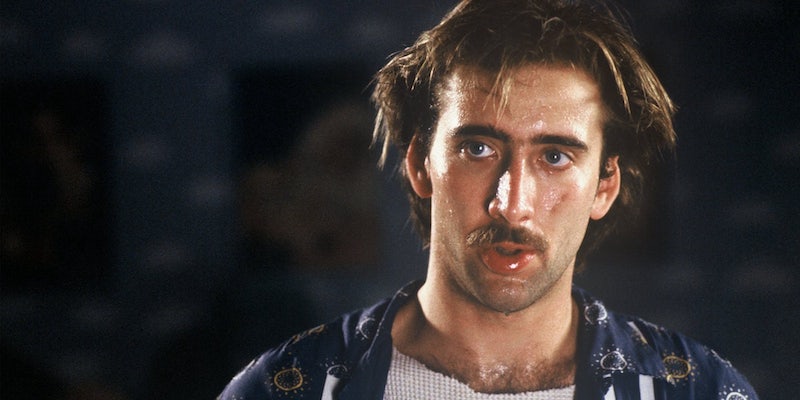 It’s the Cage of Enlightenment: Essential Nicolas Cage Movies You Have to Watch

Despite all our rage we all just fans of Nic Cage.

Few actors are as prolific as Nicolas Cage. The guy has been in so many wild movies that he can literally make a movie in which he plays himself. You could puzzle yourself into circles, is he always playing a form of himself in every role? Is Nic Cage himself a character that Nic Cage has devised? Look, you’ll lose your mind going down that path. Instead, watch (or rewatch) any of these essential Nicolas Cage performances.

This Cohen brother film is about an ex-convict and a police officer who fall in love and try to have a baby. When a rich family has a set of quintuplets, they decide the family has more than they can handle, so they’ll just take one off their hands! But, alas, parenting isn’t all that they bargained for.

If you’ve somehow managed to miss this film, it’s probably my second favorite Cohen bros movie (after Fargo, of course). Nic Cage is perfectly and adorably dumb but inherently altruistic… except for the burglary and stuff.

Talk about the golden age of romantic comedies – this movie will sweep you off your feet every time. It’s a classic “love letter to New York” romance. It also sees Nic Cage as Ronny, the absurdly romantic bread maker whose estranged brother Johnny is engaged to Loretta, played by the incomparable Cher. Loretta has given up on romance in exchange for the stability her boyfriend Johnny can provide.

This movie is definitely Cage wild eyes, but it’s also got Cage bedroom eyes. The man really can do anything. Plus, anyone who can hold a screen with Cher is impressive. The star-studded cast also.

Who doesn’t love Nicolas Cage in a meta-movie about the development of movie scripts? Meryl Streep plays an author who forms a unique attachment to a man who hunts rare orchids in Florida swamps. When her book is optioned for a film, Cage plays the screenwriter… and his twin brother.

Seeing two Cages playing against each other is undoubtedly a reason to watch this movie, along with all the waxing poetic about loneliness. But it’s an enjoyable character-driven story that comes together in the end. Let’s just say the screenwriter gets his big movie climax.

If you’ve forgotten just how intensely talented Nicolas Cage is, might I recommend Pig? The actor portrays a misanthrope farmer who spends his days hunting for valuable truffles in the woods with his beloved pet pig. One night, the pig is kidnapped, and Robin will go on an epic quest of sorts to find her.

Whether there really is or isn’t a dark side to Portland’s foraged food scene, the richness of the story and lead character are what make Pig such a captivating watch. It’s really one of Cage’s can’t-miss performances, and it’s pretty recent, too.

Buckle up for a wild ride with Nicolas Cage playing Ben, an alcoholic whose habit has spiraled so far out of control that he’s fired from the screenwriting agency he works for. So he decides to go to Las Vegas in order to drink himself to death. And he does just that – and in the process, meets and falls in love with Sera, played by Elizabeth Shue. Both performers were lauded for their performance, and for good reason. It’s a beautiful, vulnerable, sometimes hard-to-watch story of love and addiction.

It’s a Romeo & Juliet-inspired story for the early 80s about a teenage valley girl who falls in love with a punk, played by Nicolas Cage. It’s a classic high school story about falling in love and social perceptions. Plus it ends in peak 80s prom fashion.

Nicolas Cage movies that are so bad they’re good

Oh you knew it was gonna be on here. Is it the most memeable Cage? Possibly. It’s prime 90s action movie energy, and it’s got Cage with his most luscious hair of all time.

He plays Cameron Poe, a convict on a prisoner flight who’s about to be paroled and go home to his family. But the other convicts on the flight, led by John Malkovich, have hijacked the plane and plan to leave the country! Now Poe has to figure out how to safely land the plane while pretending to help them keep it in the air.

There are so, so many technical plot holes in this movie. So whether you get joy from picking apart bad 90s action movies or you like to get swept up for the ride, this movie is for you.

1997’s Face/Off is a legendary edition to the good-bad action movie library of history. John Travolta plays Sean Archer, an FBI agent who’s been chasing the notorious criminal Castor Troy, played by our guy Nic Cage. To find the location of a bomb, Archer undergoes a surgical procedure that allows him to wear Troy’s face in order to get his brother to tell him where the bomb is located.

Of course, Troy wakes up and then steals Archer’s face! And it’s off to the races with Travolta playing Cage and Cage playing Travolta. It’s a wild premise in a wild universe that can only come from the mind of John Woo (Hard Boiled). It’s a hell of a good time with a twist ending, if you can even imagine that.

Alcatraz! Hostages! Chemical weapons! Nicolas Cage! What more do you need to know?! Another ridiculous offering in the 90s action movie collection, The Rock is Cage playing an FBI biochemist who gets help from the only prisoner to ever escape Alcatraz, played by Sean Connery.

Once again, this story is big with real-world loopholes. It’s high-octane one-liners and action movie cliches in all the best ways. It’s also Michael Bay before he trampled all over your favorite childhood franchises.

Red and Mandy are in love and just living their best life on the outskirts of society. Unluckily for them, they’re right next door to a cult whose leader has set his eyes on Mandy. Leaving a blood-soaked Red behind becomes their biggest mistake, as Nicolas Cage’s character goes on a gory, psychedelic revenge spree.

This movie is bright and full of aggressive coloring. It’s loud, it’s fantastically shot, and it punches hard. If you’ve been a fan of the violent and the trippy ever since the creepy tunnel scene in Willy Wonka, Mandy is the heavy-metal horror movie you’ve been waiting for.

STREAM ON AMAZON PRIME
STREAM ON SHUDDER
Share this article