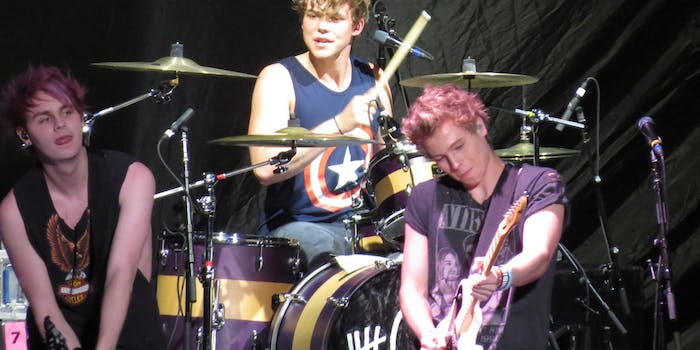 They're taking over the world, one Tumblr reblog at a time.

Last year, four pop-punk teenagers from Australia exploded on the music scene. Boy-band charm and Blink-182 hooks sent their self-titled debut to No. 1 in over 11 countries, making 5 Seconds of Summer one of the most successful bands of the genre before they could legally drink stateside.

5SOS’s success mirrors a new shift in alternative music, one that hasn’t truly been felt in a decade. Emo, pop-punk, whatever term feels most fitting—it’s in the midst of a glory moment.

The diversification of the genre makes emo especially interesting in 2015. For the older set, the Emo Revival (if you can call it that) is in full swing, taking a DIY punk-rock and post-hardcore scene from Midwestern basements to sold-out shows at L.A.’s Echo club. But we’re focusing on the younger generation of teenage fans. Legions of kids on Tumblr and YouTube have wielded their immeasurable influence to send a new fleet of bands to stardom and massive Internet fame. Here are our picks for the bands you need to know now.

If there’s a label to look to for the best and brightest young pop-punk bands around, it’s Pure Noise Records. If there’s a band to focus on, it’s State Champs. The Albany, N.Y., band crafts massive pop hooks with infectiously modern melodies, somehow acting as a head nod to the Warped Tour acts that pre-dated them while feeling as classic as the genre will allow. If that’s not convincing enough, it should be noted that State Champs were invited on the road with All Time Low on their massive North American theater tour this year.

Sleeping With Sirens is one of the most reblogged bands on Tumblr. They’ve been around for a while now, forming in 2009 at a time where you could throw a rock in any American suburb and hit a post-hardcore band with too many members.

What separates Sleeping With Sirens from the rest is its young, loyal, and ever-growing fanbase. The group’s last album, Feel, debuted at No. 3 on the Billboard 200, a pretty absurd feat for a band with breakdowns. If the name is unknown to you now, pay more attention next time you’re walking through a mall. These guys are as ever-present as My Chemical Romance were in the mid-aughts. They will lead the next stage of modern metalcore.

It almost seems silly to include We Are the In Crowd on a list like this, but the group’s influence is undeniable. The Poughkeepsie, N.Y., band formed in 2009, debuting an energetic pop-punk sound in its first full-length, Best Intentions, in 2011. Their second and most recent release, Weird Kids, debuted at No. 29 on the Billboard chart—again, an impressive feat considering the pop acts they were up against last year. Also noteworthy: WATIC is fronted by a woman, Taylor Jardine, proving that pop-punk isn’t a boys club—or that the space occupied by women wasn’t just formed and filled by Paramore’s Hayley Williams.

Against the Current owe a lot to We Are the In Crowd. Hailing from the same upstate town, ATC are managed by WATIC’s Mike Ferri. The difference is that Against the Current possess a fandom that veers slightly younger. It’s directly related to 19-year-old frontwoman Chrissy Costanza and her new and immense Internet popularity as both a singer and a YouTube makeup vlogger.

Unlike the pop-punk bands of past or present, ATC welcome a sort of YouTube-bred fame: They cover massive pop songs and write their own. They bridge the gap between pop-punk and mainstream pop. Judging by their Tumblr following, it’ll pay off soon enough.

Real Friends were one of the most exciting acts on Warped Tour last year, perhaps rivaling only State Champs. Their sound is similar to bands like early Taking Back Sunday and later Saves the Day, a bit more pop-rock with bitingly honest lyricism. They haven’t been around for very long, either: They formed in 2011 and released their debut full-length last year, and the album hit No. 24 on the Billboard 200.

With a shoegaze-y sound and and bratty vocals, Title Fight is hard to categorize. It’s one of many emo bands fighting against and for the genre, existing comfortably within this world and stretching its limits.

The result? Tunes that play well in the NPR and Alternative Press crowds.

Joyce Manor fans intersect with Title Fight diehards. Both bands lean toward an older fanbase and exist in harmony with longtime Pitchfork readers and the new-school Warped Tour crowd. California’s Joyce Manor is more punk-pop than pop-punk; the songs are heavier without sounding sludgy, and they carry the melodic influence of punk stalwarts like Jawbreaker and Screeching Weasel.

8) Stick to Your Guns

Metalcore is making a comeback too, and right now the band to keep an eye on is Stick to Your Guns. Its latest album, Disobedient, debuted at No. 1 on the iTunes metal chart, above nü-metal classics System of a Down’s Toxicity and Korn’s Greatest Hits. In 2015, that’s no easy feat. Stick to Your Guns’ sound drips with more machismo then, say, Sleeping With Sirens’.

Issues, on the surface, is also largely a metalcore band, but it bucks expectations by venturing into unfamiliar pop and R&B territory. Issues’ brand of 20-something angst is ambitious but not overdone. Combining abrasive sounds and breakdowns with Top 40 hooks, it’s simultaneously groovy and nasty, synth-heavy and scratchy, and it somehow works. The fans on Tumblr will be the first to tell you.

The Story So Far is another example of a band that’s been around almost a decade. With each passing year, they seem to grow in success, gaining new fans with each record. There’s nothing too complicated about their brand of pop-punk, but they’ve earned a reputation for just being, well, good dudes. Frontman Parker Cannon made news last year when he jumped offstage at a Montreal Warped Tour set to assist a fan who was allegedly being choked by security.

5 Seconds of Summer, in three short years, managed to accomplish what pop-punk has been trying to do since Blink-182 landed hit after hit on Total Request Live: reach superstardom. With 5SOS, this meant almost completely selling out their first stadium headlining tour, hitting the road with the biggest act out there—One Direction—and having their debut album hit No. 2 stateside and No. 1 in many more. The reason for their success is completely founded on an unrivaled teen fanbase. It started with a YouTube account and a tweet from 1D dreamboat Louis Tomlinson, and it snowballed into something much bigger, something undeniable. If they’re unfamiliar to you now, you probably haven’t visited Tumblr once in 2015.

There’s a select crew of major-label pop-punk acts that resonate internationally but have a special place in the hearts of American teens. Warped Tour will do that to you. Much smaller than fellow Aussie outfit 5 Seconds of Summer, Tonight Alive is a power-pop five-piece from Sydney. Their big break came when they caught the attention of Fearless Records (Plain White T’s, At the Drive-In), eventually landing a deal with Sony. Tumblr fandom discovered the band when Blink-182’s Mark Hoppus guested on the track “Thank You & Goodnight” and frontwoman Jenna McDougall began collaborating with Good Charlotte and Simple Plan.

There’s a lesson to be learned here: Team up with your fellow pop-rockers. Then take over the world, one reblog at a time.

Update 12pm ET, March 25: We’ve added a Spotify playlist with some picks from this list. Enjoy!