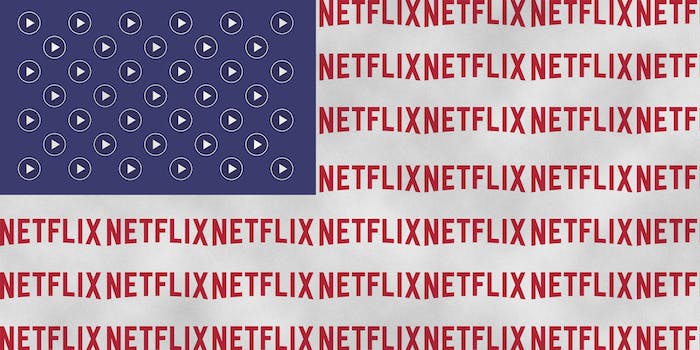 The 6 most godd*mn American movies on Netflix

Let's take a trip down memory lane and celebrate us some America.

The Fourth of July is a time for fireworks, barbecue, drinking, and swimming. But eventually, when the fireworks have all been lit, and day-long drinking and eating has everybody looking for somewhere comfortable to sit, there will come a time—as there always does—when watching a movie will be in order. Lucky for you, we’ve curated a list of six of movies that are verifiably, 100 percent all-American.

Sorted in chronological order, the following films might be an extremely eclectic bunch, but they have one thing in common: They’ll all make you proud to be an American. And, if you’re reading this and you aren’t American, don’t worry: They’re also all still quite good—unless you’re a high-ranking official in North Korea, in which case the last two might not be the best suited for you.

With all that said, God bless America, and onto the the first film (which, coincidentally, deals mainly with back-stabbing and corruption):

Sometimes, if you want an artistic, cinematic interpretation of how the West was won, you need to watch a movie that was shot in Spain by an Italian director.

That director, of course, is the famous Sergio Leone. Being Italian didn’t stop Leone from being fascinated by our country’s history, including our wars, our organized crime, cowboys (just in general, really), and, in this case, the building of our railroads.

Leone’s films are grouped into the genre of “Spaghetti Westerns,” but, by the time he got around to making his fourth Western, things were far from spaghetti. He did his research, extensively, on the railroad game during the era of the Wild West for Once Upon a Time (and also on the Civil War for the film proceeding it, The Good, the Bad and the Ugly), which means that, aside from the dramatic gun duels (and the dramatic, well… everything), the film doubles as both a beautiful slice of Americana art and a history lesson.

Quentin Tarantino has named The Good, the Bad and the Ugly to be his favorite film of all time, but watching the opening 12 minutes of West (or even just the trailer) makes it quite clear that this film’s style is even more prevalent in Tarantino’s work; it may be almost 50 years old, but the film feels like it could have been shot by Tarantino in 2012.

Yes, the film is an Italian production, but it nails the soul and legend of the Western frontier better than any American production ever has (with the possible exception of The Wild Bunch—but that one’s not streaming).

Rocky is everything the American Dream is about: a man aspiring to make something of himself, doing so with nothing on his side but hard work and his own tireless dedication to his goals.

To those who would call the plot of Rocky unrealistic and cheesy: First off, your cynicism is damaging your life, and you must get it under control ASAP, and learn to cry during sports films. Secondly: The story behind the making of Rocky is even more unlikely than that of a no-name boxer training to fight The Champ and lasting all fifteen rounds.

Working as an usher for $36 a week, Stallone turned down the ridiculously large sum of $350,000 that was offered to him for the script he’d written, as producers Irwin Winkler and Robert Chartoff wanted a known star for the film’s lead, and he insisted that he play the lead himself. So: He turned down a six-figure offer, at a time when he had $106 in his bank account. In fact, Rocky’s dog in the film was Stallone’s own, real-life dog, and he was so poor when shopping the script around that he almost sold it, due to his inability to afford to feed it.

The producers buckled, under the condition that Stallone continue working as a writer without pay, and that he was paid at scale for his lead performance. When the project was taken to United Artists, the studio leads were appalled at the fact that a known actor wouldn’t be starring in the film, and slashed the budget from $2 million to $1 million. It was, in their view, an inevitable flop of a film.

They were wrong: The low-budget boxing film with an unknown lead actor went on to be the highest-grossing picture in 1976, and it won an Academy Award for Best Picture (the first sports film to do so).

If that’s not the epitome of the American Dream…

Yes, the film is a satire (and an extremely goofy satire, at that), but it nonetheless captures everything that was American at the birth of the ’80s, and the death of the ’70s. Taking place on the last day of summer camp in 1981, it was a time when Reagan had just taken office; America’s war on drugs, the Iran-Contra affair, the American funding of Osama bin Laden and the Taliban to fight the Russians in Afghanistan at the tail end of the Cold War, and the removal of pornography from cable television had all yet to happen. Satire or not, Wet Hot American Summer does a spot-on job of defining the tail end of a more innocent time in this country.

American Summer is, by a wide margin, the film on this list that was shit upon the most by critics upon its release. It has a critics’ rating of 31 percent on Rotten Tomatoes, and the overwhelmingly poor critical response to the film kept a lot of comedy fans from catching it during its theatrical release.

There’s another score on Rotten Tomatoes, though—the Audience Score—and that currently sits at 80 percent. This is a clear-cut case of critics simply not understanding a film but its genius prevailing, letting it slowly build a diehard core of dedicated fans over the years. If you haven’t seen it, and you liked, say, Anchorman (even just a little bit), you need to stream this ASAP, preferably before the Netflix Original Series, Wet Hot American Summer: First Day of Camp, becomes available on July 31.

Yes: One of the great deadpan gags of the film was that actors were playing teenagers who very clearly were not at all teenagers, and now they’ve made the followup, with every single original cast member (including Bradley Cooper) returning—now 15 years older—a fucking prequel. That’s how amazing this show/series is.

Top Gun is, quite simply, American as fuck: Jets, motorcycles, patriotism in the face of death, more cockiness per frame than perhaps any other film in existence, aviator glasses everywhere, and Tom Cruise all combine to make this film the ultimate snapshot of the Reagan-era, 1980s America—so much so, in fact, that Matthew Modine turned down the role of Maverick due to the film’s Cold War politics, and Bryan Adams refused to allow one of his songs on the soundtrack because he felt the movie glorified war.

Adams was right: The film not only glorified war, but it made engaging in air combat look like the most badass thing that a person could possibly do in life. In fact, the film was so goddamn patriotic that, as legend has it, the U.S. Navy set up recruiting booths outside the theaters—to catch audiences after viewing the film—and ended up with a record-high number of applications.

Like Rocky, the general consensus before Top Gun’s filming was that it would be an utter flop, with virtually every actor in Hollywood turning down roles in the film. But, also like Rocky, it ended up being the highest-grossing film of the year it was released.

Before Trey Parker and Matt Stone took a break from making South Park to win eight Tony Awards for their musical The Book of Mormon, they made a satirical film about the War on Terror that starred marionettes (and, in one scene, cats).

No other film captures the American spirit of 2004 like Team America: World Police does. At the time, the country was still reeling from the attacks on 9/11, and we were entering our second war in retaliation for those attacks with Iraq, while still occupying Afghanistan. This was a time in which, due to France’s unwillingness to aid us in that second war, we renamed French fries “freedom fries.” The attitude of the day was “We’re America, fuck you.”

The film opens with the Team America heroes killing some terrorists in Paris, while also destroying the Eiffel Tower, the Arc de Triomphe, and the Louvre in the process. The mission is considered a glowing success, and that’s quite an accurate depiction of our foreign policy at the time.

The main antagonist of the film is Kim Jong-il, who is mercilessly ridiculed in the film. Nobody batted an eye at the prospect that North Korea’s leader could be offended by this portrayal, because this was 2004, a time when we were Americans, and anybody taking issue with us could just go fuck themselves. Things have changed slightly since then, as seen with the release of the final film on this list…

In many ways, The Interview serves as a foil to Team America: World Police—it centers on a covert mission, designed to cause the least amount of international fallout as possible, and its heroes are consistently scared shitless in the face of their mission. Plus, it doesn’t have any marionettes. Oh, and the major difference: When The Interview was critical of North Korea’s leader, vague threats of terrorist attacks were made, and rather than telling them to fuck themselves, every major theater chain in the country folded and refused to screen the film. Over the course of 10 years, we’d gone from “America, Fuck Yeah!” to realizing that the War on Terror hadn’t so much ended, as it had made the world a lot scarier, and our gravitas had been reduced significantly in the face of violent, unpredictable threats being made against us.

In a lot of ways, The Interview’s mission to quietly assassinate a world leader is a return to the days of old for our country, when our leaders would speak kindly about countries while having their leaders assassinated in ways that couldn’t be traced back to us. And, although it’s undeniably a satire, it’s an accurate reflection of our place in the world 10 years after invading Iraq.

But The Interview also has a special quality to it, and one that sets it apart from any other film in the history of American cinema: Despite the fact that major chains cancelled their screenings of it, the indie theaters that opted to go ahead and show the movie as planned ended up with lines around the block of people wanting to see the film just to stick it to North Korea.

People came out in droves to prove they couldn’t be bullied by another nation, and it’s an odd thing, but seeing The Interview in a theater was what Independence Day is all about: It was a way to show that, regardless of danger, the American people will ultimately not let another country dictate whether they’re going to see a Seth Rogen film on the big screen.