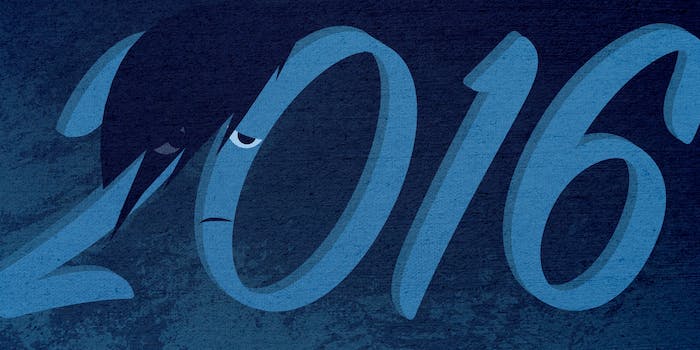 Call it whatever you want, just get in the pit and love someone.

Emo and pop-punk are back in the public consciousness—and the Times is on it.

Blink-182 has a new album and more impressively, people are paying attention to it. Taking Back Sunday is feuding with a Los Angeles nightclub because of its emo-themed throwback night. My Chemical Romance seized the web over reunion rumors. (It’s apparently not happening.)

But with emo in particular, the inevitable itch for 10-year-old nostalgia is disappointing because the genre is routinely producing captivating records for all ages.

Thanks to the connectivity of Tumblr and YouTube, modern emo kids are slicker, younger, faster—disciples of a post-Fall Out Boy strain of pop-aiming, suburban-fed, nasal-crooning music that comes branded in Hot Topic gear. Beneath this youthful aesthetic is the good stuff.

Yet the “emo” label is universally always absent from how they self-identify—it’s a gross term associated with anti-woman music about teenage breakdowns. That’s fair enough: Call it something sanitized like “indie rock” and get in the pit.

This band lost a frontman but got better. The London quartet sounds like Pavement with fuzzed-out, towering-but-effortless choruses. You can call it revivalist ’90s alternative, but try telling me “Hold Me Closer” wouldn’t light up an Absolutepunk.net message board in 2003. Yuck growls and rocks out like the most charismatic high school garage band of all time.

This band features eager, literary bros from Philadelphia who get anxious about traveling and sing about missing their girlfriends on the road. It’s earnest and wordy. Their third album is produced by emo whisperer Joe Reinhart (Joyce Manor, Hop Along) and packs the requisite feels into 27 minutes.

The band name is reportedly an acronym for “pathetic use of potential,” and it comes from singer Stefan Babcock’s grandmother. It’s chant-fueled punk with a gooey center. Lost Boys punk about flippant youth straddles the line between mind-rotting retread and joyous swashbuckling. PUP lands most of the time—”Sleep In the Heat” is the most moving song of the year and it’s about the death of a pet chameleon.

Singer Christian Holden took to Tumblr to blog about his upcoming album and how it made him feel. The interludes on the third album from this Worcester, Massachusetts, group are simply titled with GPS coordinates. Holden sings in dense bundles of millennial romanticism like “You cut our ropes, left the umbilical, and now I carry around this weight of broken hope.”

The Hotelier is the most emo band in the world.

But it’s one of maybe 20 American rock bands that matter because of the songwriting prowess, heart-exploding energy, and humanist grace.

This heralded record has been touted as hip “indie” and “alternative” from New York City. But if identity-exploring rock about adolescence and anxiety—presented by a multicultural, prolific, dynamic auteur—isn’t emo then the genre is useless and doomed. “What do you do with the loving feeling if the loving feeling makes you all alone?” sings 25-year-old, Japanese-born Mitski Miyawaki. At its most vile, emo absolves its narrators from the basic responsibilities of relationships, crawls under the bed, and pettily blames the heartbreaker: Mitski explores those cross-wire connections like a sage.