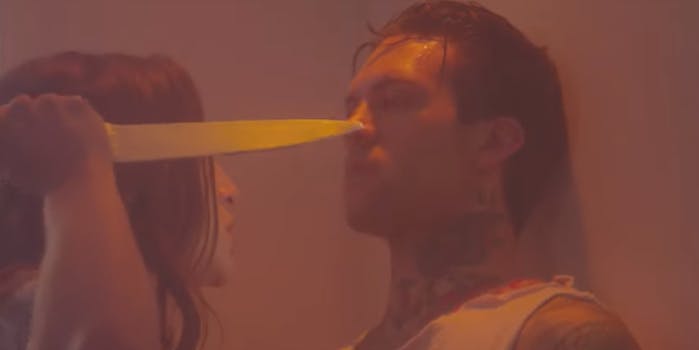 'Her & Him' features a couple vying for dominance in their relationship.

The once-Disney Channel star unveiled her upcoming film Her & Him via Pornhub’s Behind the Scenes YouTube series. The film aims to portray a couple vying for dominance in their relationship. It features adult film stars Abella Danger and Small Hands.

“What inspired me to do the movie was basically thinking about this relationship between a male and a female,” Thorne said in the opening moments of the video. “This fight over dominance and how much that relates to us in our general world besides in a sexual scenario.”

In a trailer for the film, Danger and Hands’ are involved in a tense, verging on violent, sexual relationship. At the outset of the trailer, Hands discovers an insidious search on his lover’s phone. “How to kill your boyfriend and get away with it,” is tidily typed into Google. What follows outlines a struggle for dominance in the relationship, as both parties clearly attempt to gain the upper hand. A mixture of tension, passion, and rage are easily communicated in the film’s brief trailer.

Thorne explained that her original aim was to create a “Christmas horror movie.” Instead, she created a “very beautiful, ethereal neon type of vision.” The 21-year-old actress has grown quite a bit since her days on the Disney Channel’s Shake it Up, but this is still new territory for her. “The process of shooting was quite interesting,” she said. “Because we had, you know, real-life fucking on set.”

“Her & Him is a modernistic, sexually explicit Romeo and Juliet-like depiction of two star-crossed lovers who have unbridled sexual longing for each other,” he told the New York Post.