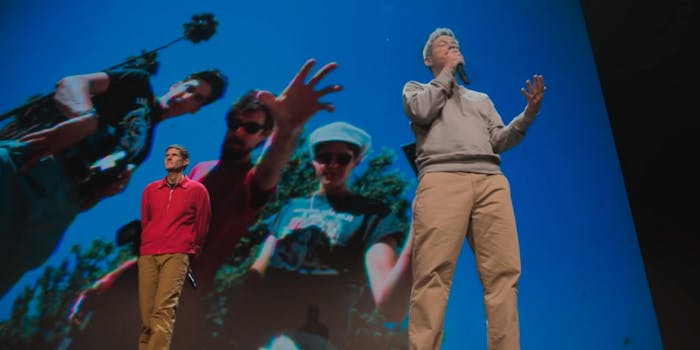 ‘Beastie Boys Story’ is a moving look at chapter and verse

Adam Horovitz (Ad-Rock) and Mike Diamond (Mike D) are the lone storytellers in front of an audience of longtime fans, but there is a thoughtfulness that elevates it—and a collective reverence for Adam Yauch (MCA), who passed away in 2012.

While the “live documentary” format takes a little getting used to, the Spike Jonze-directed film, taped in April 2019, is an adaptation of 2018’s nearly 600-page Beastie Boys Book. Horovitz and Diamond don’t try to hide that they’re reading a script, but they keep it loose, looking back on their formative days in NYC, aided by some truly amazing archival footage of them as teenagers living through ’80s punk and rap history. They were “Monty Python as much as we were Black Flag.”

The doc also allows them to look back at their mistakes, like elbowing out original member Kate Schellenbach as they came under the sway of producer Rick Rubin and manager Russell Simmons. They reserve some additional shade for Simmons later in the doc for not paying them after 1986’s Licensed to Ill, though the multiple allegations of sexual assault against him aren’t commented on. They lament how their defining hit, “(You Gotta) Fight for Your Right (to Party!),” went from a parody of bonehead party dudes to their identity, and address the juvenile lyrics to “Girls.” But the hindsight is reserved for their own experience, not the industry-wide sexism that gave them an advantage—and still persists.

Throughout, Yauch is positioned as the heart of the group, a sage who consistently blew Horovitz and Diamond’s minds with his technical and musical knowledge. The L.A. chapter of the story is warmer, and shows a renewed version of the Beasties moving away from novelty rap and into the sampling and instrumentation that informed Paul’s Boutique and Check Your Head. Footage of Yauch perfecting his character Nathaniel Hörnblowér, who famously crashed R.E.M.’s acceptance speech at the 1994 MTV Music Awards, shows his commitment to the bit. A Yauch bassline that was tossed around for months is what led to “Sabotage.” He organized the Tibetan Freedom Concert to raise awareness outside the alt-rock bubble.

If there’s a flaw it’s that there are moments when Beastie Boys Story feels like a book report instead of two old friends riffing. Jonze leaves in some flubs to balance the formality, but his influence isn’t heavy handed. The tone changes towards the end, when Horovitz and Diamond get choked up discussing their last gig in 2009, at Bonnaroo, and offer each other emotional support. Beastie Boys Story is a rearview-mirror ride for fans, but it’s also about grief and perspective between friends.