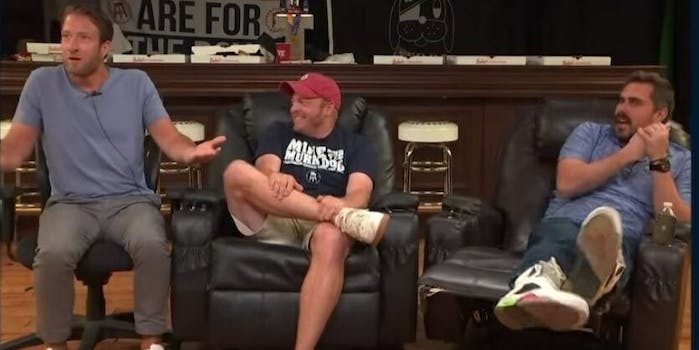 Barstool Sports has become one of the leading sports media companies in the country, despite its misogyny, rabid and relentless Twitter fan base, and general sophomoric behavior. So, perhaps it shouldn’t be surprising that when discussing former President Donald Trump campaign manager Corey Lewandowski’s mocking of a disabled 10-year-old, three of the site’s most popular commentators managed to surmise that it was all so very hilarious.

Lewandowski enraged much of the country this week when he responded to the story of a child with Down syndrome who had been separated from her parents after entering the U.S. by saying “womp womp” in a mocking tone. But to Barstool Sports’ Dave Portnoy, Daniel “Big Cat” Katz, and Sam Bozoian, Lewandowski’s remark was actually pretty darn funny.

Portnoy, the site’s founder, introduced the topic on their Barstool Rundown show, and though he wasn’t sure on which channel Lewandowski spewed his rhetoric, he knew one thing: Lewandowski was hilarious. While the trio agreed that the comment was downright nasty—Katz said “he’s going to hell” and is a “terrible person”— Portnoy said, “To drop a ‘womp, womp, womp’ right here is so awesome. It’s bad, you shouldn’t do it … but it’s something out of There’s Something About Mary.”

Responded Bozian, “That was so funny. It just trumps everything. That’s just fucking hilarious.”

The trio asked co-worker Liz Gonzalez—who, as Deadspin notes, is a first-generation Mexican-American—what she thought of Lewandowski’s remark. She did not find it funny.

Said Gonzalez: “It’s shameful that this is where we are.”

Bozoian said, “You sit on your couch, you flip over to the channel, you get right into the top of that segment, and then you hear that play out that way, you hear the ‘womp womp,’ you’ve got to laugh.”

Said Katz, “I think the problem is you’re not realizing that I’m not laughing at the misfortune, I’m laughing at how out of touch and absurd that was.”

Despite its immense popularity and probably because of it, Barstool Sports still embraces its juvenile, sexist sense of humor, which last year cost the site an ESPN partnership. This segment is unlikely to win them any additional support from people who aren’t already fans of what Barstool Sports does.