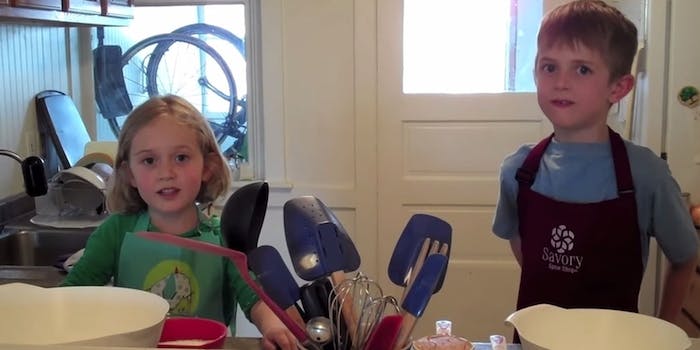 ‘The Barefoots’ is an adorable kid-run YouTube cooking show

Prepare to overwhelmed with cuteness. And hunger.

Once it was proven that kids could handle hard news (and field reporting), it was only a matter of time before they branched out with their broadcasting talents. In Denver, two future chefs are charming YouTube with an adorable cooking show.

Things kicked off in May 2014 with their first episode, “Pumpkin Muffins.”

They even did a video that outlines how to make puppy chow.

According to a profile on the show by the Denver Post, Amelia’s father is Andrew Orvedahl, a local stand-up comedian and online video producer in Denver. His videos have appeared on FunnyOrDie and Amazon has tapped him as a writer for an online sitcom.

While Orvedahl’s résumé is impressive, it’s safe to say that his own on-screen skills are nowhere near as adorable as that of his daughter.