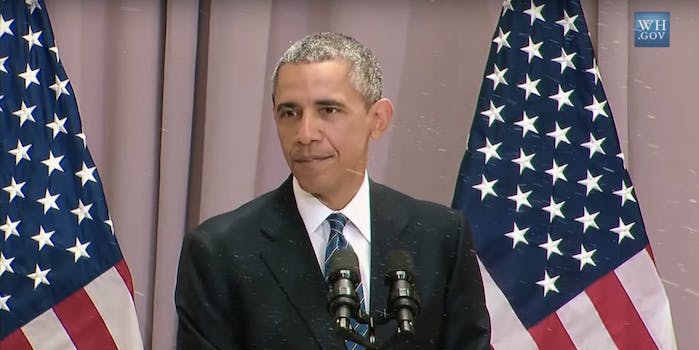 Baracksdubs gives us the gift of the season: Obama singing Mariah Carey

He sounds a little pitchy, tbh.

As his time in office as president of the United States comes to a close, Barack Obama is probably thinking a lot about cementing his legacy. But thanks to YouTube, he really doesn’t need to worry about it.

For the past five years, Baracksdubs has been giving us the glorious gift of Obama “singing” such delights as Drake’s “Jumpman,” Taylor Swift’s “Shake It Off,” and Daft Punk’s “Get Lucky.” Just in time for the holidays, though, we’re getting the greatest gift of them all: Obama’s dubbed version of Mariah Carey’s ubiquitous “All I Want for Christmas Is You.”

At the end of the video, you can participate in a short survey to help the Baracksdubs folks figure out where they go from here. They’re looking for guidance both in terms of content (there’s some precedent for Trumpdubs) and sustainability, including floating a subscription option and more.