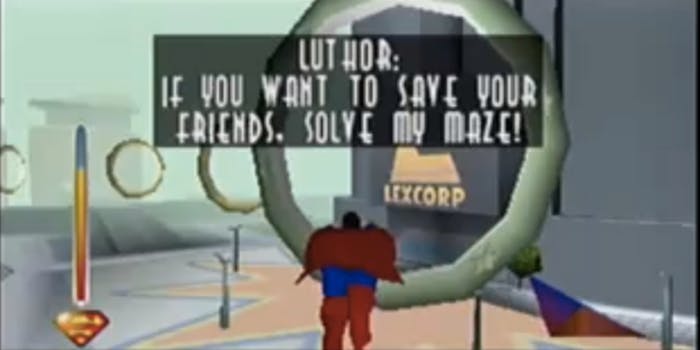 Would you play bad video games to help out a worthy cause? It's not a hypothetical question.

What would you do to help those in need? Would you–gasp!–play bad videogames with your friends?

Surprisingly, it can work. That’s the idea behind the GameToAid, an organization of students in Adelaide, Australia. Their mission is to periodically engage in videogame marathons where they play for days nonstop, livestreaming the process. They claim to have raised almost $20,000 total for charities so far.

Their latest, and current project is the Superhero Marathon, which began today and lasts for 72 hours. They’re asking for all donations go straight to charity: water, devoted to providing clean water to people in developing nations.

As this endeavour’s theme is superhero games, the marquee event is 1999’s Superman: The New Adventures, regarded as one of the worst video games of all time, which they played for most of the first day. Much of the game is devoted to making Superman fly through rings that Lex Luthor left suspended midair.

“We’ve just started a 72-hour Superhero-themed gaming marathon to raise money for charity: water. For every upvote, we’ll fly through 1 ring in Superman 64,” t0b4, of the players in GameToAid, posted to Reddit.

“even i wouldnt upvote for such a charity that makes you play that horrible…horrible game,” responded another redditor.