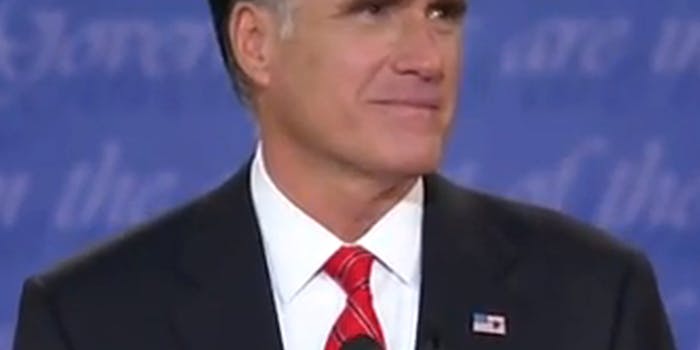 "When they laugh at you, you'll drown."

A few hot topics from this year’s heavy and heated presidential election campaign: horrible weather, mormon Judy and the cow people, and a sustained session of hums.

That is, of course, if you’re the anonymous man behind Bad Lip Reading, the man who can make even presidential debate moderator Jim Lehrer sound adventurous and enticing.

BLR’s most recent clip, “Eye of the Sparrow—A Bad Lip Reading of the First 2012 Presidential Debate,” posted onto YouTube Tuesday afternoon, just two days before Barack Obama and Mitt Romney’s vice presidential running mates square off Thursday evening. And if that goes anything like round one, we can be sure to see all sorts of conversation about purple idiots, labradoodle puppies, and “funny radiation coming up on my desk.”

The video pokes a bit more fun at Mitt Romney than it does at Obama, but it’s unlikely that Bad Lip Reading carries any sort of partisan sentiment.

“I’m not targeting Mitt Romney by doing that,” the anonymous author told the Daily Dot after he posted “More Mitt” this summer. “I’m not targeting Joe Biden, either. I’m not trying to influence the outcome of the election, and people find that strange. They want those videos to be politically motivated, but it’s not. It’s just funny.”