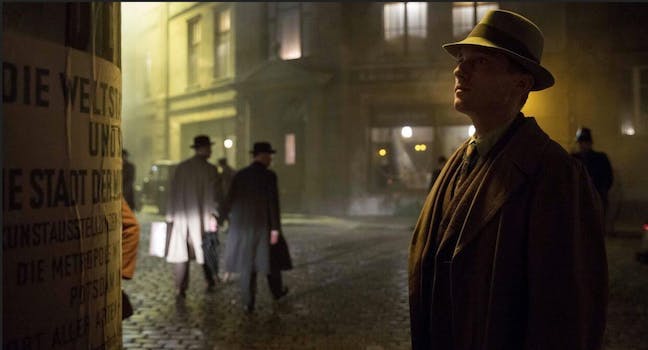 Its depiction of young Nazi party members and the Black Reichswehr are chilling.

Since the election of Donald Trump, it has become something of a cliché in America to invoke the rise of Nazi Germany when discussing the current state of American politics. These comparisons are far from groundless—after all, neo-Nazi groups have held rallies and the government is operating concentration camps on the southern border—but these invocations of Nazi Germany can feel symbolic or perfunctory. While the Second World War and the Holocaust remain popular subjects for Hollywood productions, the circumstances that led to the rise of the Nazi Party have been largely ignored by American film and television in recent years.

German filmmakers Tom Tykwer, Achim von Borries, and Henk Handloegten have delved into the murky political waters of Weimar Germany in their excellent police thriller Babylon Berlin. Set in 1929, this slick program wraps up ruminations on the rise of the National Socialist German Worker’s Party, as well as the machinations of extra-legal military organization known as the Black Reichswehr, in a satisfying mystery show that dives into the glamorous and seedy underbelly of Weimar Berlin. The rise of the Nazis is not the central story of Babylon Berlin: Most of the characters in the show must deal with other, more pressing concerns. But the threat of fascism—that viewers know will inevitably overtake Germany—is never absent.

RELEASE DATE: March 1, 2020
CREATORS: Tom Tykwer, Achim von Borries, and Henk Handloegten
STREAMING: Netflix
A film star is murdered and Nazis are on the rise in this marvelous German-language crime show that dives into the criminal underworld of Weimar Berlin.

In Babylon Berlin’s third season, which is now available on Netflix in the U.S. and U.K., Detective Gereon Rath (Volker Bruch) and his girl Friday Charlotte Ritter (Liv Lisa Fries), of the Berlin Police’s homicide division, lead the investigation into Betty Winter (Natalia Mateo), an actress murdered on the set of a new musical film. The investigation encompasses the most powerful gangster of the city’s underworld, a man simply known as “The Armenian” (Mišel Matičević), who funded the film; Winter’s husband Tristan Rot (Sabin Tambrea), who happens to be an occultist; and a mysterious figure in a cloak and hood who appears every time a murder takes place and then vanishes without a trace. Meanwhile, Oberst Wendt (Benno Fürmann), the head of the Political Police and a member of the Black Reichswehr, works to cover up his assassination of his predecessor.

Rath, a traumatized veteran of the First World War, is steadier this season than in seasons previous—when he suffered from morphine addiction. That has been hypnotized away by his brother Anno (Jens Harzer), a psychiatrist-cum-cult leader who’s friendly with the city’s criminal element and operates under a false identity after his assumed death in the war. Bruch is a small man, and Rath’s angst and intensity radiate from his terse, compact body and from his pristine trench coat and fedora. Rath does not smile often; instead, he listens intently, with a degree of concentration so inadvertently seductive that virtually every female character on the show has gone weak at the knees for him at one point or another.

He lives with his “wife” Helga (Hannah Herzsprung), a woman who is, in fact, married to his brother; after discovering that Anno is not dead, Rath is beset by guilt, and his relationship with Helga begins to sour. Helga is a frustratingly vacant character; unlike the other female characters on the show, she has few distinguishing characteristics and is wholly lacking in wit. Most of the show’s secondary characters are relatively two-dimensional, but they are vivid and entertaining thanks to snappy writing and energetic performances from a talented ensemble of actors. The Armenian’s wife Esther (Meret Becker), for instance, is in many ways an archetype of an aging actress, but the show understands her intense creative drive, her penchant for drama, and her frustration with her husband’s tendency to resolve conflicts with violence, and as a result, she is a highlight of this season. The fact that the writers could not find a way to make Helga similarly interesting is disappointing.

The true object of Rath’s affections, and Helga’s opposite in every way, is Charlotte, who has moved up from a secretarial position to become an assistant in the homicide division and a trainee detective. Though Charlotte, who once worked as a sex worker and still lives in precarious financial circumstances, has struggles of her own, she is irrepressibly warm-hearted and optimistic. When she faces discrimination from resentful men in the department, she grinds her teeth and then carries on by finding more interesting work to do. She and Rath make an ideal marriage of opposites: He can’t resist her wit and intelligence, and she’s drawn in by his sad eyes and his appreciation of her talent. The romance between the two of them is tentative and halting—one senses that the showrunners haven’t quite decided how it should unfold—but their scenes together are consistently electric.

This highly entertaining show is also exceptionally crafted: The immaculate sets reconstruct modest apartments as well as decadent, palatial abodes; the costumes sparkle and pop with bold color. The cinematography is confident and crisp, and the film-within-the-film, Demons of Passion, is a remarkable and convincing pastiche of German Expressionist cinema, borrowing particularly heavily from Fritz Lang’s Metropolis (1927). If Babylon Berlin has an aesthetic flaw, it is its conservatism: As sensuously pleasurable as it is to watch, it is not tremendously aesthetically interesting, as the comparisons to Weimar-era cinema this season invoke make clear. German expressionist films like Metropolis and The Cabinet of Dr. Caligari (1921) conveyed anguish and trauma through heightened costumes and make-up and sets that distorted and defied perspective. The surreal aesthetics of those films were not a superficial fantasy but an expression of real emotions in the wake of the existential crisis of the First World War.

Babylon Berlin is not so ambitious. It falls somewhere in-between so-called Prestige TV dramas like Mad Men and Succession and standard cop procedurals like Law and Order. Though it looks beautiful, its mysteries can be a little silly. (It strains credulity, for instance, that the Berlin Police homicide squad would call in an expert in Criminal Telepathy to perform a séance to find a missing murderer.) These pulpier elements can occasionally undermine the show’s political ideas. Still, its depiction of young Nazi party members and the Black Reichswehr are chilling. When Rath’s nephew Moritz (Ivo Pietzcker), an aimless and angry fourteen-year-old, gets sucked into the Hitler Youth, he eagerly drinks in his baby-faced, snake-tongued group leader’s assurances that members are bound by their blood against a common enemy that lurks “on the street, in school, in your family, everywhere.”

Fürmann, meanwhile, is superb as Wendt, a pristinely groomed, classically handsome psychopath who ruthlessly manipulates the justice system to achieve his own ends. Though Wendt is in the process of plotting the downfall of the democratic government on behalf of the military, he uses Nazis to accomplish his dirty work and espouses their anti-Semitic beliefs. The Nazis are a little too vulgar for Wendt, who dresses pristinely and knows how to charm women, and is well-versed in the established workings of government. He is willing to use the Nazis to his own ends despite their aesthetic differences, however, and, as we know, it was not the Black Reichswehr who ultimately rose to power in the 1930s.

It is impossible to forget, watching Babylon Berlin, that the Nazis will soon be in power. The democratic principles that Rath and Charlotte attempt to uphold are on borrowed time. A better show might dispense with some of this program’s narrative contrivances and melodramatic tendencies, and take either a more expressionistic or a more realistic look at the rise of the Nazi Party in the Weimar era, but Babylon Berlin’s genre conventions serve a purpose. Detective stories require a solution and, usually, punishment for the bad guys. But the bad guys in Babylon Berlin are, eventually, going to win. Rath and Charlotte might be able to catch small-time crooks, but the masterminds behind the winding conspiracy theories that underpin the show will eventually rise to power. The tension between the audience’s desire for narrative satisfaction and the historical impossibility of that satisfaction prevents the show from being mindless entertainment, and reminds its viewers that the seductive pleasures of detective fiction only go so far. The case might be solved, but the fascists haven’t gone anywhere.