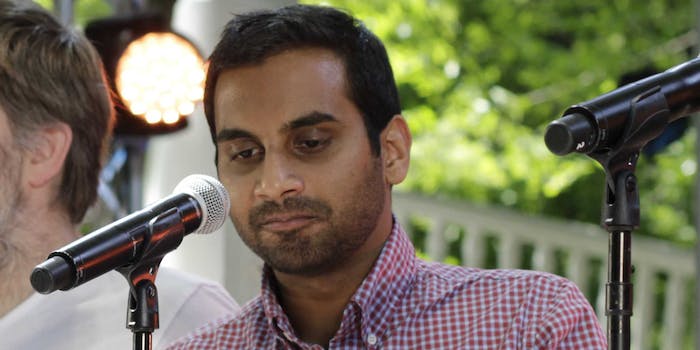 'Somebody tell ALADDIN HOP OFF MY D**K!'

Comedian Aziz Ansari hosted Saturday Night Live this weekend, predictably skewering President Trump in his opening monologue. Ansari called the newly elected president “basically the Chris Brown of politics.” Moreover, the Master of None actor made comparisons with Brown’s fanbase, which has been willing to overlook the singer’s domestic violence transgressions, to Trump’s supporters.

Brown wasted no time clapping back at Ansari on his Instagram, with a racist comment captioned to a clip of the monologue: ““FUCK NO!!!!!! Somebody tell ALADDIN HOP OFF MY DICK!”

In a subsequent video, Brown remains in disbelief: “Can’t fuckin’ catch a break. This n***a said, ‘Donald Trump the Chris Brown of politics.’ I swear I’m moving, getting the fuck out of here.”

After a break in the clip, Brown continues: “Don’t fuckin’ trust what you see. Even salt looks like sugar.”

Much of the monologue centered on racism, Saturday’s Women’s March, and also Trump voters, whom Ansari suggested shouldn’t be demonized. “Some people are like, ‘Everyone who voted for Trump is a dumb, racist, misogynist, homophobe,” explains Ansari. “Alright. Now, hold on. We’re talking about 63 million people. Don’t judge them by their worst.

“I’m sure there’s some people that voted for [Trump] with reservations,” he continued, before launching into his comparison. “I’m sure there’s a lot of people who voted for Trump, the same way a lot of people listen to the music of Chris Brown, where it’s like, ‘Hey man, I’m just here for the tunes. I don’t know about that other stuff. I just like the dancing and the music. I don’t condone the extracurriculars.’”