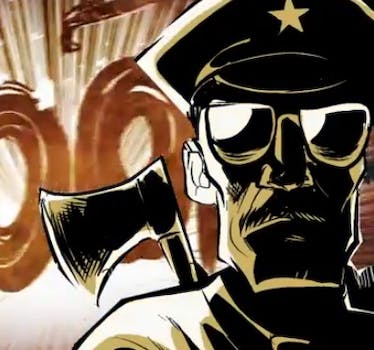 The Nicolle brothers' webcomic about an axe-wielding cop will be a part of Fox's revamped Animation Domination block on Saturdays.

Axe Cop, the popular webcomic about an axe-wielding cop and his adventures as told by 8-year-old Malachai Nicolle and drawn by his significantly older brother Ethan, is jumping ship to television.

“It’s rare that you find something that feels both so new in its tone and content but also so fully formed,” Weidenfeld told Variety. “To me it was very clear that ‘Axe Cop’ has potential to be a larger franchise.”

Created by the Nicolle brothers in December of 2009, the webcomic has developed an incredibly large online fanbase and collected raving reviews. But it’s not the only animated franchise to make the leap to television.

Brad Neely, the creator of viral videos like Cox & Combes’ “George Washington” and the character “Baby Cakes,” moved to Adult Swim in the fall of 2011 in the form of the animated show, China, IL.

So what lies ahead for Axe Cop, now that it has made it to TV?

“Am I the only one who wants an Axe Cop game rather that MW3?” asked YouTuber TheAxeFish in a top comment liked more than 100 times.

“My 9-yr-old says that Axe Cop is a very well rounded character and deserves his own multiplayer game,”  tweeted author and comic book writer Joe Hill. “I am not going to argue.”

Here’s one of our favorite episodes, created by a fan of the series with permission from Nicolle. Notice the prescient comment, upvoted more than 70 times seven months ago. “Must get televised on Adult Swim,” wrote hurtado4325.