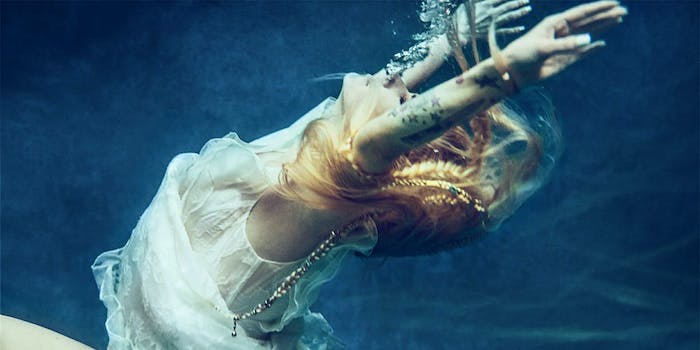 Lavigne's back with a new song based on her experiences with Lyme disease.

Canadian rocker Avril Lavigne is making her triumphant return to the music world after three long years. Since releasing the non-album single “Fly” in 2015, she’s been largely absent from the music industry.

Though she’s been far from silent on social media about her plans to release a new album, she’s finally released an official statement on her website detailing a new single and her experiences while making it.

I wrote a letter to my fans on my website. https://t.co/R2PuqcKx0d pic.twitter.com/xbmS0WifO1

“Head Above Water” was written as the star struggled with Lyme disease, fighting the “battle of [her] lifetime.” Lavigne stated that the song was one of the first she wrote from her bed during one of the “scariest moments” of her life in the statement. The powerful song, she elaborates, was written after she had already “accepted death” and felt her body “shutting down.”

The song’s title is a metaphor for Lavigne’s battle with the disease as she “prayed to God” and “asked Him to help [her] keep [her] head above water.” The details revealed in her powerful letter are touching, explaining a bit behind where she’s been this whole time and what the new track will explore. It sounds like one of the singer’s most personal in some time, especially if it details some of the more grim points during Lavigne’s extreme moments with the illness.

Avril’s fans, who have long been anticipating the singer’s return with new music, are touched by her frankness and opening up about her struggles with Lyme disease.

Thanks Avril for your words so touching and powerful. I'm crying, I feel a deep sorrow for what you've been through, but also happiness for your healing, your generosity and your commitment. Thanks to your Art that has saved you. I'm sure you've produced your ace Masterpiece 🙏

“I had accepted death and could feel my body shutting down”

YET HERE YOU ARE STRONGER THAN EVER AND WE ARE MORE THAN READY pic.twitter.com/s4MCEN8r9J

Wow, just wow. That letter is incredibly deep and I can feel the emotions that went into it. Thank you @AvrilLavigne for sharing your story with the world. We are here to embrace you in every way possible. NEW ERA!!

Bring on the tears 😢 pic.twitter.com/Rw0MGBM3so

Thank you @AvrilLavigne for the focus you are bringing to Lyme disease.

Your music has changed so many lives, including mine. I can't wait to hear this masterpiece ✨

The rest are just ridiculously excited that Avril’s back to save music once more.

Avril Lavigne has a new song coming out and 10 year old me is SCREAMING https://t.co/sZAmqyM71m

No matter your response to Avril’s announcement, one thing’s for sure across her fanbase. There’s nothing but love and support, and fans can’t wait to see the “Sk8er Boi” singer rise up and claim her pop punk throne once more.

Avril’s new single “Head Above Water” will be debuting on Sep. 19, 2018. Mark your calendars for what’s guaranteed to be an emotional time.