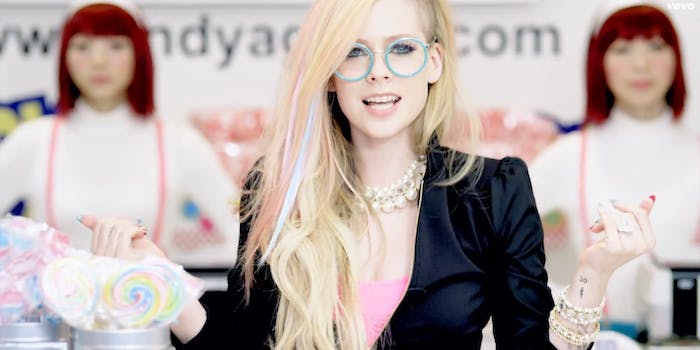 Avril Lavigne denies accusations that her new video is racist

The song was bad, but the video might be worse.

It’s easy to make fun of Avril Lavigne. She’s been milking the same teen rebel pop-punk image for almost 15 years, she’s married to a dude from Nickelback, and her music is rarely what you’d describe as critically acclaimed. However, her new song Hello Kitty has inspired something more than the typical derision we’ve come to expect from rock music purists.

Featuring four expressionless Japanese backup dancers, a watered-down Kyary Pamyu Pamyu aesthetic and liberal (and nonsensical) use of the word “kawaii,” the song and video have been widely criticized for being an embarrassing example of racial and cultural exploitation.

It only took a few hours for Lavigne to respond on Facebook and Twitter, with a message that began, “RACIST??? LOLOLOL!!!”

RACIST??? LOLOLOL!!! I love Japanese culture and I spend half of my time in Japan. I flew to Tokyo to shoot this video…

…specifically for my Japanese fans, WITH my Japanese label, Japanese choreographers AND a Japanese director IN Japan.

The video was pulled from YouTube hours after it posted amid a high volume of negative comments, but it now appears to be viewable on Vevo’s YouTube channel. It’s pretty clear from her reactions on social media that Lavigne doesn’t really understand why people are accusing the video of being racist—or, perhaps, that she is pretending not to understand. “I love Japanese culture,” is the same defense offered by every tweenage weeaboo Japanophile in the Western world, and it doesn’t actually preclude racial insensitivity or cultural appropriation.

It doesn’t help that there are plenty of other things wrong with “Hello Kitty.” Even if you disagree with the accusations that the video appropriates Japanese culture, the song still sounds like a poor Skrillex/Ke$ha mashup. Plus, there’s the fact that the lyrics seem to be about lesbian experimentation at a sleepover, co-written by Lavigne’s husband and two other men. At 29 years old, Lavigne is fully in charge of her image as an artist, and yet the end result is a weird combination of throwback to the mid-2000s, Gwen Stefani-esque Japanophilia, and a desperate attempt at jumping on the dubstep bandwagon.

Lavigne’s Facebook and Vevo pages are full of fans commenting to say that they don’t think the video is racist at all, implicitly backed up by the fact that this album was far more successful in Japan than in the U.S. or Canada. If the song wasn’t quite so bad, it’s likely that the video would’ve flown under the radar and received far less backlash than it actually did. But the fact is that in many cases, people aren’t reacting specifically to “Hello Kitty,” but to the ever-growing list of white celebrities who have profited from appropriating music and fashion styles from other cultures.

On its own, “Hello Kitty” would probably have seemed like an embarrassing but ultimately forgettable attempt to copy Harajuku fashion and J-pop cutesiness. But in a pop-culture landscape that includes Gwen Stefani and her voiceless Harajuku Girls, Miley Cyrus, and Lily Allen’s twerking backing dancers, and most of Madonna’s career to date, this comes across as just another example of a white pop star casually exploiting another culture for YouTube hits and a vague stab at being “exotic.”