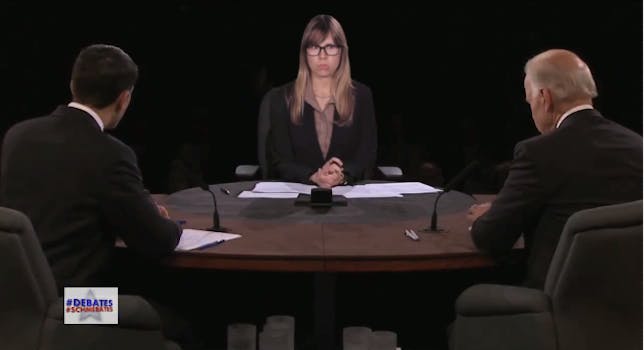 Which vice presidential candidate is a better "unintentional singer?"

Malarkey or not, here they go again.

The Gregory Brothers have established Auto-Tuning the candidates as a debate staple alongside live-GIFS and the buzz on Twitter, and after successfully “songifying” last week’s debate between President Barack Obama and Mitt Romney, they’ve also brought the vice-presidential candidates into the mix.

Biden already received the Auto-Tune treatment after his debate with former Alaska governor Sarah Palin in 2008, and scored high marks as an “unintentional singer.”.

“[Unintentional singers are] pretty similar to the qualities that make an intentional singer good: a strong voice, a clear message, and passion,” Gregory told the Daily Dot in 2011. “There’s also the other part of the picture, which is unintentional songwriting and lyricism.”

The Gregory Brothers’ touch turned last night’s debate into a catchy R&B song as the candidates discussed their families’ hardships and their plans for the country’s future. Biden’s voice Auto-Tunes just as well as it did four years ago, while the jury’s still out on Ryan.

Sarah Gregory even channeled moderator Martha Raddatz as she called for the candidates to plainly explain their plans for the budget.

“Speak on an eighth grade level so we know what you’re talking about,” she sang.