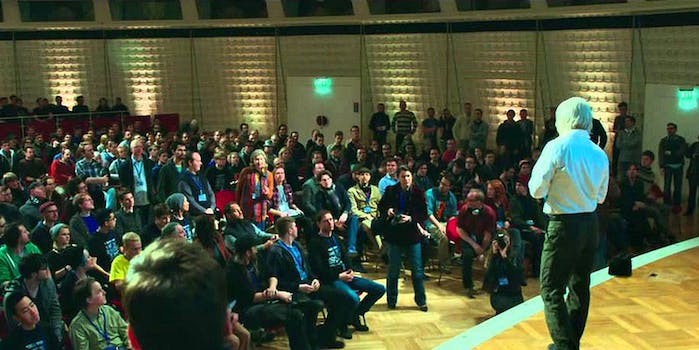 Julian Assange pans his own biopic, a ‘geriatric snoozefest’

The Fifth Estate gets zero thumbs up from WikiLeaks founder.

The critics have not been kind to The Fifth Estate, a dramatic thriller based on the WikiLeaks saga—and that includes the film’s main character, Julian Assange, who issued an official statement on TwitLonger that enumerated his complaints:

People love the true WikiLeaks story: a small group of dedicated journalists and tech activists who take on corruption and state criminality against the odds. But this film isn’t about that. This is a film by the old media about the new media. Viewers are short-changed. Step one: write WikiLeaks staff out of the story. Where is our primary spokesperson Kristinn Hrafnsson, three time winner of journalist of the year, who we deployed to war-torn Iraq? Where is our courageous journalist Sarah Harrison who spent 39 days protecting Edward Snowden in a Moscow airport – and is now in effective exile from the UK? Step two: write the old media into the story. Instead of the exciting true story, we get a film about a bland German IT worker who wasn’t even there and a fabricated fight over redactions with the old newspapers and the State Department saving the day. The result is a geriatric snoozefest that only the US government could love.

Assange also released a letter written to The Fifth Estate’s star, fandom-favorite Benedict Cumberbatch, in January of this year, before principal photography commenced. Although the WikiLeaks founder says he would probably enjoy meeting the actor, and that he is no doubt “a nice person,” he beseeches Cumberbatch to find a different project, as the movie will be “overwhelmingly negative for me and the people I care about.”

No word yet on if Assange will be seeing Captain Phillips in IMAX instead.