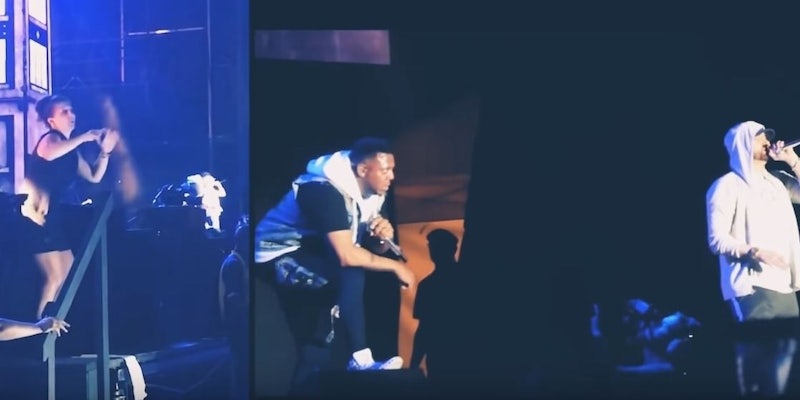 There are 466 million in the global deaf community. By 2050, that number is expected to be double that.

Holly Maniatty stood in front of a sweaty Bonnaroo music festival crowd that was yearning for Wu-Tang Clan, and though many eyes probably didn’t focus their attention on her—at least not at first—the internet certainly did afterward. That’s because Maniatty, an American Sign Language interpreter, furiously signed the lyrics that were being rapped in 2013, all while she grooved along to the song.

No, Maniatty’s signing and Maxey’s ability to make a splash a few years later with his MTV VMAs commercial have led to more awareness in this viral era and, more importantly, even more change with how people interact with the deaf community.

That sweaty Wu-Tang Clan show from six years ago continues to reverberate for those who are hungry to make a difference.

“Going viral has helped quite a bit,” said Maxey, the CEO of DEAFinetly Dope, an organization that is trying to marry the hearing and deaf communities through sign language and music. “Before now, we were starting to see that shift. It went from being, ‘Look how fast they can sign, look how they’re manipulating their hands to the music.’ Now, it’s become more of a, ‘Where can I find a class to learn that? Where can I find somebody to teach me that?’ It’s becoming a social heartwarming moment instead of just focusing on, ‘Hey, that’s cool.’ When it’s on social media, people become more aware of that. That definitely helps.”

Though you don’t necessarily see it while you and millions of others are watching her videos, Maniatty puts plenty of work into her job as an interpreter. It takes hours of preparation for a single performance. She has to listen to the songs until they become second nature, and she has to know the story behind those tunes. She has to know what the artist was thinking.

Before the viral craze, Maniatty and others who interpret for festivals and concerts were doing it pro bono. They paid their own expenses. They had eyebrow-raising iTunes charges. Now, though, they’re paid for their work, because festivals understand their importance. Not just in the humanitarian sense, but also, perhaps cynically, because it means bigger business.

Maniatty said one festival where she worked increased its early-bird ticket sales about 35 percent for the next year after concertgoers (and people who watched her online) saw her song interpretations. But more than the untapped business potential that exists or a cool-looking video that trends for a few days, it’s about something even more special. It’s about the bond between the deaf and hearing communities through music. It’s about a human connection.

One of the artists Maniatty once interpreted for approached her afterward and said, “That’s how my music would look.” She wants the audience to feel the same way, because she knows deaf people want to experience live music events just like those who can hear.

Maxey, one of the 466 million people worldwide who are part of the deaf community, certainly knows the feeling.

“When it comes to the deaf community experiencing music, people are shocked that it’s such a thing,” Maxey said. “I don’t think people are aware of how much we look at captions, look at lyrics. Imagine you’re in a world of silence 24/7. Now, you can feel something.”

For Maxey—who used an ALS interpreter for part of the panel on Thursday but who also spoke into the microphone for many of his answers—the world of hip-hop made him feel that something. He’s Black. He’s deaf. He said he’s a minority wherever he goes. But when he’s signing for a crowd—and he toured with Chance the Rapper last year—he helps facilitate emotion and change.

“It becomes more of a motion picture,” he said. “Your hands are moving, and it creates brain candy. It’s linguistics candy. It’s like, ‘How can I listen to this in one way but make it with my hands in a completely different way?’”

For Maxey, this is the perfect time for him and others to raise awareness. Videos can go viral. Then, that viralness can organically lead to adjustments and change. The deaf community can feel confident that festivals and concert promoters want them there. The hearing community can see the music in a different way. Everybody can jam together.

That’s what Maxey and Manietty want the most: For deaf people and for people who can hear to experience that connection together at the same time in the same place. Isn’t that what music is supposed to be about anyway?