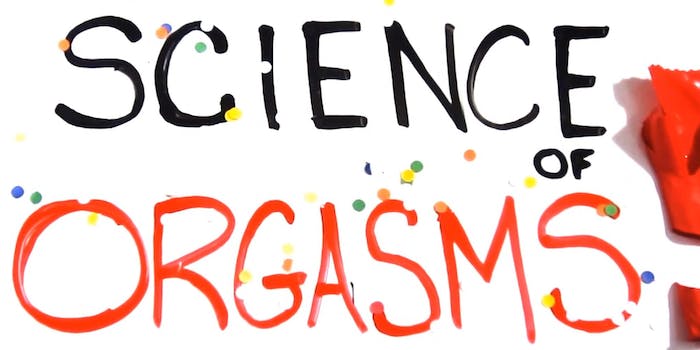 Explore “The Science of Orgasms”

The channel that famously explained the power nap takes on an exciting new scientific topic: the big "O."

Time to turn your attention towards the creatively scholastic folks behind AsapSCIENCE, purveyors of knowledge for all the cool and quirky things that you actually know nothing about. Today’s topic: orgasms. We are now officially talking about science!

“Following arousal, the brain stimulates blood flow to the genitals, your body and heart rate increases, and the central nervous system is fully engaged, sending signals of enjoyment to the brain’s reward system,” explains Ontarian Mitchell Moffit, who runs the edutainmental YouTube channel alongside college buddy Gregory Brown. “These thousands of nerve endings constantly relay pleasure signals to the brain, resulting in an orgasm.”

The result: for guys, a decrease in aggression. For gals, sometimes up to 20 seconds of “many areas of a woman”s brain” being “shut down completely.”

Also, at some point, the science of orgasms helped give us this little joke.

Moffit and Brown launched their asapSCIENCE YouTube channel three months ago with a tutorial detailing “How to See or Hear the Big Bang.” Since then, the two have released 15 videos spanning subjects from scientific hangover cures to the secret behind rising sea levels. Their video on the science of power naps has picked up more than 719,000 views.

“It’s grown such that there’s now this neat community where other people are also asking questions and helping to answer things that people want to know on the videos themselves,” Moffit told the Daily Dot, adding that this particular episode was based on a user-submitted inquiry.

“We want to bring in more than just the people who love science, so we have to appeal to peoples’ better needs and the things that they can relate to.”

And who can’t relate to the “O” face?