How to get Arnold Schwarzenegger to record your voicemail

The Governator is pulling out all the stops to promote his upcoming autobiography. He'll even follow you on Twitter.

Want Arnold Schwarzenegger to serve as the official spokesperson of your voicemail message? Me too. This week the Governator’s made it easy.

Schwarzenegger, who, as a Austrian bodybuilder-turned-movie-star-turned-California-governor, is pretty much the embodiment of the American dream, has written a book about his life, suitably titled Total Recall: My Unbelievably True Life Story and set for an Oct. 1 release.

The book is being hustled on his website as “one of the most anticipated autobiographies of this generation,” a “candid story by one of the world’s most remarkable actors, businessmen, and world leaders.”

So, Awhnahld’s really excited about the book, and he wants to promote it accordingly. On his site, he’s set up a number of nobel offers, which we’ve arranged and annotated in order or likelihood that they happen to you.

This one’s pretty simple, though Arnold seems to be taking his sweet, damn time getting around to hitting me up with a #followback. Log in to the site through Facebook or your email. (It’s easy and below.) Click on that “Tweet Now” button on the right and send out a pre-prescribed message to your followers. There’s an @Schwarzenegger in there. I suppose he’ll get to it eventually. 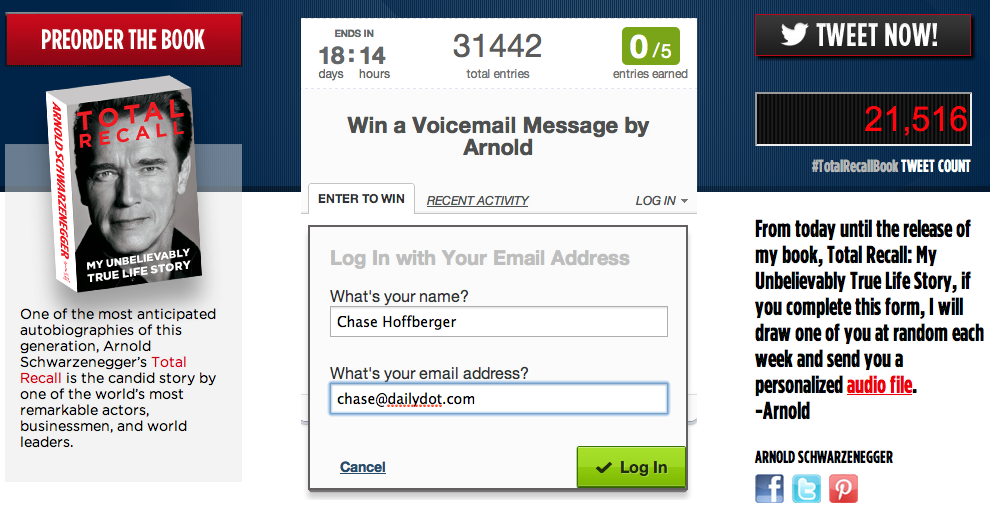 Hardcover, eBook, audio? Name your format, Sully. The Governator has an “unbelievably true life story” to tell, and he wants you to see it or read, any way that you see fit!

3) Arnold will record a personalized voicemail message that you can use on your phone.

The dish, straight from the horses mouth: “From today until the release of my book, Total Recall: My Unbelievably True Life Story, if you complete this form, I will draw one of you at random each week and send you a personalized audio file, (baby).”

That’s right. Sign up and enter a random drawing. Tyler Baker did it last week, and he won. And Arnold stayed true to his word.

And remember, if you screw it up, you will be the next victim of the Predator. Arnold said so.