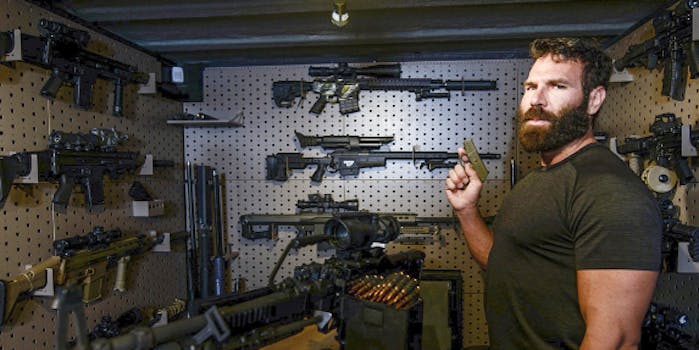 ‘People are dying, you’re running away not helping them.’

A marine veteran blasted social media star Dan Bilzerian after the celebrity uploaded a video to his Instagram of the Las Vegas shooting. Bilzerian was in Las Vegas for the Rout 91 Country Music Festival on Sunday before the venue came under fire.

Bilzerian had been at the side of the stage with childhood pal and country star Jake Owen before the shooting began. In the video, you can see Bilzerian running from the festival grounds as gunshots ring out in the background.

“Holy fuck. This girl just got shot in the fucking head. Still fucking crazy,” he says.

Dakota Meyer, a Marine veteran and a Medal of Honor recipient, uploaded a screengrab of the video with a caption that criticized Bilzerian for filming the video and then running away without helping.

This is why children shouldn't classify heroes by their followers or their photos. @danbilzerian this is what kills me about people like you. Always playing "operator dress up" and so so tough when the cameras are on. A woman just got shot in the head and you are running away filming that's not what operators do. Please stop trying to be someone your not. People are dying, you're running away not helping them and pretending it's worthy of a video is disgusting.

The military vet’s criticism focused on how Bilzerian tends to portray himself in military fatigues to his followers, but runs away in the face of actual danger. The vet called the video “disgusting.”

Bilzerian achieved social media relevancy after a video of a women stroking his beard as he watched a poker game went viral. In these last few years, Bilzerian has risen as the unofficial “King of Instagram,” with over 22 million followers.

The over-muscled stud’s Instagram feed is an endless scroll of hot women, trips around the world and, most notable of all, his enthusiasm for guns of which he is always sharing photos of. This video has drawn criticism toward Bilzerian’s constant posturing as a military “operator” to his millions of followers with ample photos of military grade weapons and vehicles.

Happiness is a warm gun

Other users chimed in, calling Bilzerian a coward and a fraud for using the video as a social media gimmick.

everyone classifying @DanBilzerian as a hero. Read this from a Medal of Honor recipient @Dakota_Meyer. You ran that's all you did. pic.twitter.com/Pb1pfEMjGE

According to his fans and other users, Bilzerian ran back to his Las Vegas home where he grabbed an automatic rifle, and came back to help clear out victims during the shooting. No definitive proof has shown up online, however.

One screengrab shows Bilzerian on the scene with the police, but it does not appear he is wielding a gun it’s is unclear whether he returned to the scene before the gunman was taken down.

Dan Bilzerian is a legend… he saw a girl get shot in the face then runs and grabs his ar and goes back to get people out..

This man Dan Bilzerian just left the shooting and came back strapped and is saving lives. MVP material right there. #PRAYERSFORVEGAS

In an interview with Hollywood Life, Bilzerian shares that he did go home to get a gun but returned to the scene after the police got the situation under control. Bilzerian called this incident “a wake-up call,” citing next time he will be sure to keep his gun on him. His follower count has not been impacted by this controversial video.