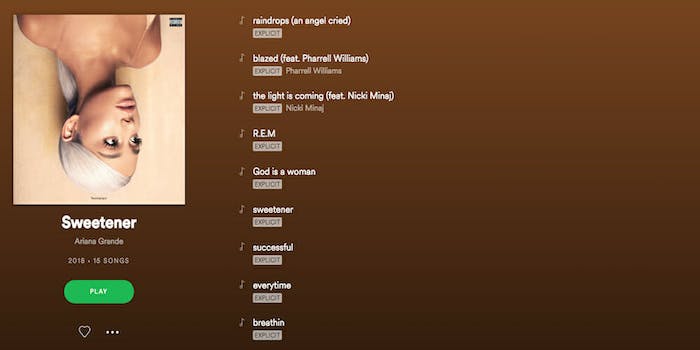 There are 40 seconds of silence.

Ariana Grande’s new album “Sweetener” dropped today and fans are having a hard time coping with the hidden tribute to the victims of the Manchester concert bombing in May 2017.

The final song on the new album, “Get Well Soon,” ends with a long moment of silence. The track runs 5:22, the date of the tragic bombing that left 22 dead and dozens injured.

Grande’s fans are reacting to the tribute and having a hard time holding it together.

She really done added 40 seconds of silence to the end of Get Well Soon so the song is exactly 5:22 minutes bc Manchester happened on May 22nd peace I’m out #Sweetener pic.twitter.com/dARzubDsGd

Just listened to @ArianaGrande ‘s new album #Sweetener and one, I’m quaking and two, at the end of get well soon, there’s a forty second pause for Manchester. WHAT A QUEEN pic.twitter.com/2Hp0yKUztK

i didn't expect the end of get well soon. crying @ArianaGrande #Sweetener

the fact ariana honoured the Manchester victims in get well soon allowing a moment of silence until it was 5 minutes 22 seconds long, I just don't have the words right now. she has my entire heart. @ArianaGrande you're an angel ♡ #Sweetener

Grande stated in an interview with ELLE magazine that “Get Well Soon” is about her physical response to the tragedy. In the months after the Manchester bombing, Grande experienced a decline in health. “When I got home from tour, I had really wild dizzy spells, this feeling like I couldn’t breathe,” she told the magazine.

Grande also showed her emotion during an appearance Thursday night on “The Tonight Show”, breaking down during a tribute to Aretha Franklin.

Grande sang “Natural Woman” in honor of the legendary singer who died on Thursday  at the age of 76.