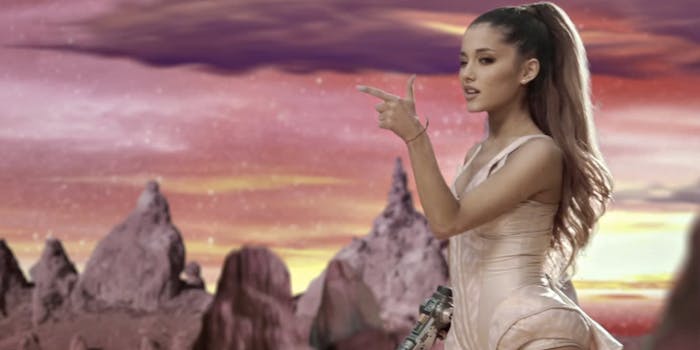 'Who says the unicorn emoji isn't for men?'

Ariana Grande is ready to skewer sexist interviewers with the power of the unicorn emoji.

While stopping by radio station Power 106 to talk up her new single “Focus,” the pop singer had to deal with a couple of ignorant questions from hosts Eric D-Lux and Justin Credible. But instead of brushing them off, she took the two fools to task.

Their first question: If she could only use makeup or her phone one last time, which one would she pick? She quickly responds, “Is this what you think girls have trouble choosing between?” and is visibly a little annoyed.

But the sexism didn’t stop there. While discussing the new emoji update, the hosts were convinced that only girls use the unicorn emoji. That’s when she lays into them, saying, “You need brushing up on equality… who says unicorn emoji isn’t for men?”

You can watch the most frustrating parts of the interview below:

This isn’t the first time the 22-year-old has called out double standards and intolerance. When comedian Bette Midler said some not-so-nice things about Grande, she was ready to point out that Midler’s statements about her “silly high voice” weren’t the most feminist. Midler eventually apologized.

After the sweeping judgements about girls, their phones, and makeup, along with the unicorn emoji chat, Grande said, “I changed my mind, I don’t want to hang out at Power 106 anymore.”

We’re there with you, Ari.