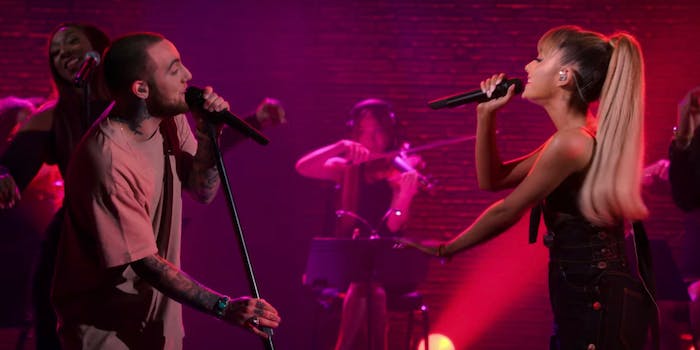 A flood of comments and tweets said Grande was at fault for the tragedy.

Ariana Grande disabled her Instagram comments on many of her posts Friday as a wave of trolls blamed her for the death of her ex, rapper Mac Miller.

Just minutes following reports that Miller, 26, died Friday from “an apparent overdose,” Instagram comments and tweets flooded in blaming Grande for the tragedy. People tagged the singer and claimed she was at fault for Miller’s death because she broke off their relationship.

I genuinely don't understand the human race. It's been like 30 minutes.

Pop Crave reports Grande’s comments were shut down on Friday “after a storm of abuse” on her Instagram account.

The comments on Ariana Grande’s Instagram account have been disabled after a storm of abuse from people blaming her for Mac Miller’s death. pic.twitter.com/Te584GSsq1

Grande, who is now engaged to comedian Pete Davidson, confirmed in an Instagram Story on May 10 that her nearly two-year relationship with Miller had ended.

“I respect and adore him endlessly and am grateful to have him in my life in any form, at all times regardless of how our relationship changes or what the universe holds for each of us!” she wrote at the time, according to Billboard.

A week later, on May 17, Miller faced DUI and hit-and-run charges after crashing his car into a utility pole in Los Angeles. Grande faced similar comments blaming her for the wreck. She responded saying it was “absurd” for fans to insist she stay in a “toxic relationship” and alluded to Miller’s substance abuse.

“I have cared for him and tried to support his sobriety & prayed for his balance for years (and always will of course) but shaming / blaming women for a man’s inability to keep his shit together is a very major problem,” she wrote.

Even after Grande blocked Instagram comments, trolls continued tweeting nasty messages to her. Some fans, including YouTuber Ryan Abe, defended the singer.

I already see people on here blaming ariana grande for mac's death. Please do not put that on anyone. This is a tragedy as it is and there is zero need to make it worse. I know for a fact mac miller would not want that. Such a sad day for music.

Later Friday afternoon, Grande’s Instagram comments were re-enabled on some of her posts. It appeared that comments blaming her for Miller’s death had been removed.