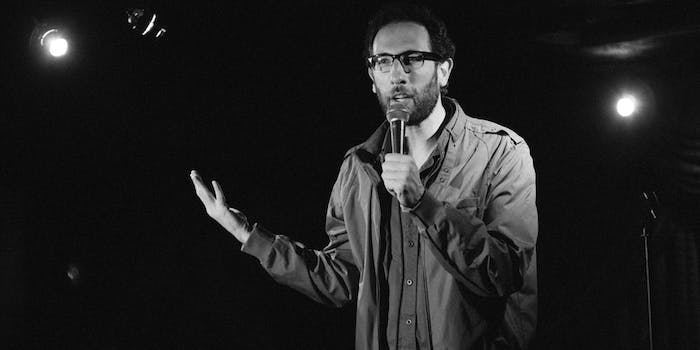 The case of the missing punchline.

Ari Shaffir is a comedian with a few standup specials under his belt, and his profile has been raised considerably since Comedy Central’s longform storytelling series This Is Not Happening debuted. In his first standup special, 2013’s Passive Aggressive, he does a bit in which he talks about “annoying” people and addresses a fellow comedian by name (it starts around the 3:40 mark):

I was talking to this girl in Los Angeles, a comedian. Her name is Damienne Merlina. She is so annoying. She’s the worst. We never have anything to talk about. She’s not even that annoying; we just have nothing in common. So when we talk I’m just like, ‘Uhhhh. You’re killing me.’ She’s so annoying.

Also, she has one arm. But it’s got nothing to do with the story. …It’s not why she’s annoying. I knew her when she had two arms. She was just as annoying then. One day her arm-to-annoyance ratio just shot the fuck up. …And she smelled. She had that fat smell. You know the fat smell. Ugh. Not every fat person has it. But it’s like, one out of 12 fat people.

This special made its network TV debut on Comedy Central on March 13, which got it in front of more eyes. One of those people watching? Damienne Merlina. On Friday, the comedian posted a video addressing Shaffir’s body-shaming, after a fan clued her into the bit. She introduces herself as a “fat, one-armed” comedian. The comments on the post alone should give you an idea of how some men view female comedians, their bodies especially. (And there are obviously more nuanced ways to explore the issue in comedy.)

Merlina has spoken about the fact that she has one arm in her standup before. And sure, comedians talk shit about each other all the time; it’s a cottage industry now. But Merlina said the two have only shared “two paragraphs” of conversation, so the tone of his bit is somewhat odd.

Still, Shaffir had a right to include the bit if he thought it was funny, and censoring comedians’ words and tone is a whole other suitcase to unpack. (Shaffir’s past “comedy” content also includes a series called The Amazing Racist, for context.) Daily Show contributor John Hodgman addressed the “rules” of standup comedy and Comedy Central’s responsibility in this matter in a blog post on Sunday:

If Comedy Central finds this bit worthy of being part of an hour special that’s their choice. But why wouldn’t they protect Damienne, themselves, and even Ari from what I think we can all agree is just a grossly dumb and damaging and hurtful decision?

Indeed, what’s even more mind-boggling than a male comedian taking out his aggression on a female comedian by name—and the bit didn’t even have a punchline or a lesson—was that it made it onto a nationally aired comedy special. (We reached out to Comedy Central for comment but did not hear back before press time.) Other comedians were similarly confused.

Perhaps that is the punchline Shaffir’s bit was sorely missing. We reached out to both Merlina and Shaffir for comment, and we will update if and when we hear back.

Photo via CleftClips/Flickr (CC BY 2.0)