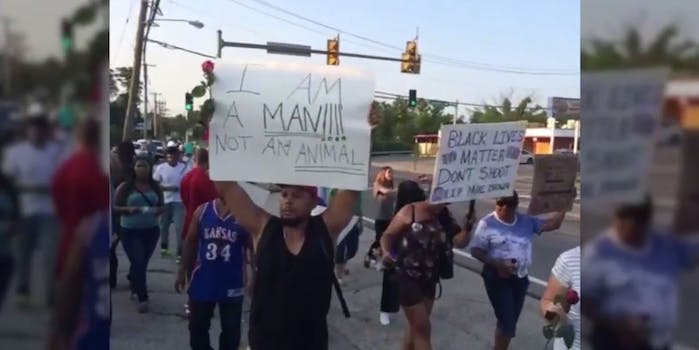 A tweet sent out by French Tuesday morning announced the short.

I'll be premiering a short film today composed of Vines shot in Ferguson in August 2014. The film will be published in a tweet at 12:00 CST.

The film premiered as promised, and has already received plenty of buzz across Twitter. With a run time of 48 minutes, French made it to compile everything he witnessed and recorded two years ago in the heat of the protests. Tuesday marks the two-year anniversary of teenager Mike Brown’s death at the hands of Ferguson police officer Darren Wilson, an event that sparked widespread public outcry—and it’s where French’s film begins. From there he documents the next 15 days of civil unrest.

Social media was an important outlet during the events in Ferguson, and like many others, French took to Twitter and Vine to document the experience. This, then, becomes an essential medium with which to tell the story of Brown, Wilson, Ferguson, and Black Lives Matter.

#FERGUSON, a short film composed of my Vines and videos from August 2014 https://t.co/0AHL8wmUJA

Twitter users have expressed lots of support for the short film, and #Ferguson has already received hundreds of favorites and retweets. The responses to it praise French for his coverage and use of social media to capture the turbulent month, and include general awe for his message and effort to keep the public informed.

I followed your work at that time and appreciate your efforts to keep our community informed.

The end of #Ferguson promotes an overall message of healing for St. Louis. French uses his climax to remind viewers that what started on this day two years ago created a movement that is still alive and moving forward.

French is reportedly considering a run for mayor.